By SpaceRef Editor
May 23, 2011
Filed under Extrasolar, Harvard-Smithsonian Center for Astrophysics, Kepler, US 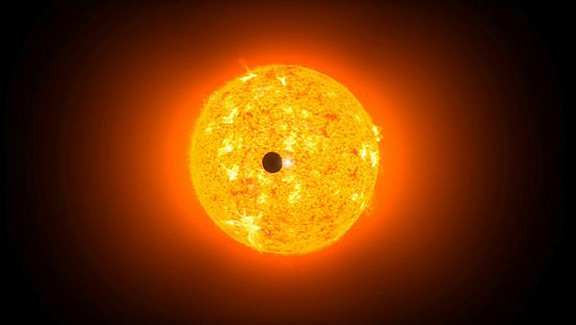 NASA’s Kepler spacecraft is proving itself to be a prolific planet hunter. Within just the first four months of data, astronomers have found evidence for more than 1,200 planetary candidates. Of those, 408 reside in systems containing two or more planets, and most of those look very different than our solar system.

In particular, the Kepler systems with multiple planets are much flatter than our solar system. They have to be for Kepler to spot them. Kepler watches for a planet to cross in front of its star, blocking a tiny fraction of the star’s light. By measuring how much the star dims during such a transit, astronomers can calculate the planet’s size, and by observing the time between successive events they can derive the orbital period — how long it takes the planet to revolve around its star.

“We didn’t anticipate that we would find so many multiple-transit systems. We thought we might see two or three. Instead, we found more than 100,” said Smithsonian astronomer David Latham (Harvard-Smithsonian Center for Astrophysics).

Latham presented the findings today in a press conference at the 218th meeting of the American Astronomical Society.

In our solar system, some planet orbits are tilted by up to 7 degrees, meaning that an alien astronomer looking for transits wouldn’t be able to detect all eight planets. (In particular, they would miss Mercury and Venus.) The systems spotted by Kepler are much flatter, with orbits tilted less than 1 degree.

Why are they so flat? One clue comes from the planets themselves. The multiplanet systems found by Kepler are dominated by planets smaller than Neptune. They lack Jupiter-sized gas giants. Scientists believe that a gas giant’s powerful gravity tends to disrupt planetary systems, tilting the orbits of neighboring worlds.

“Jupiters are the 800-pound gorillas stirring things up during the early history of these systems,” explained Latham. “Other studies have found plenty of systems with big planets, but they’re not flat.”

Multiple-planet systems may offer a chance for confirming the densities of small, rocky worlds. The more massive a planet, the easier it is to detect using radial velocity measurements (essentially the star’s wobble as a planet’s gravity tugs it). Earth-sized worlds in Earth-sized orbits aren’t massive enough to make a radial velocity signal that’s detectable with present technology.

In systems with more than one transiting planet, astronomers have another option: transit timing variations. They can measure how the time between successive transits changes from orbit to orbit due to mutual gravitational interactions between the planets. The size of the effect depends on the planets’ masses.

“These planets are pulling and pushing on each other, and we can measure that,” said Smithsonian astronomer Matthew Holman. “Dozens of the systems Kepler found show signs of transit timing variations.”

As Kepler continues to gather data, it will be able to spot planets with wider orbits, including some in the habitable zones of their stars. Transit timing variations may play a key role in confirming the first rocky planets with the right temperature for water to be liquid on their surfaces.