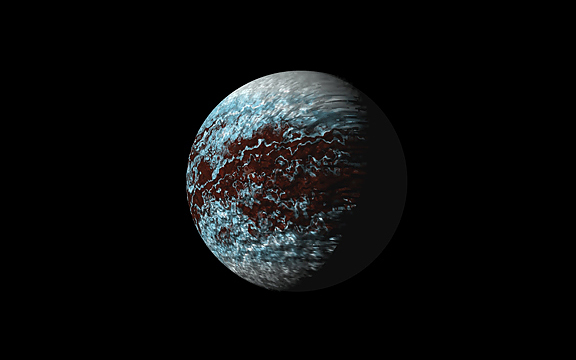 NASA’s Kepler mission confirmed the discovery of its first rocky planet, named Kepler-10b. Measuring 1.4 times the size of Earth, it is the smallest planet ever discovered outside our solar system.

The discovery of this so-called exoplanet is based on more than eight months of data collected by the spacecraft from May 2009 to early January 2010.

“All of Kepler’s best capabilities have converged to yield the first solid evidence of a rocky planet orbiting a star other than our sun,” said Natalie Batalha, Kepler’s deputy science team lead at NASA’s Ames Research Center in Moffett Field, Calif., and primary author of a paper on the discovery accepted by the Astrophysical Journal. “The Kepler team made a commitment in 2010 about finding the telltale signatures of small planets in the data, and it’s beginning to pay off.”

Kepler’s ultra-precise photometer measures the tiny decrease in a star’s brightness that occurs when a planet crosses in front of it. The size of the planet can be derived from these periodic dips in brightness. The distance between the planet and the star is calculated by measuring the time between successive dips as the planet orbits the star.

Kepler is the first NASA mission capable of finding Earth-size planets in or near the habitable zone, the region in a planetary system where liquid water can exist on the planet’s surface. However, since it orbits once every 0.84 days, Kepler-10b is more than 20 times closer to its star than Mercury is to our sun and not in the habitable zone.

Kepler-10 was the first star identified that could potentially harbor a small transiting planet, placing it at the top of the list for ground-based observations with the W.M. Keck Observatory 10-meter telescope in Hawaii.

Scientists waiting for a signal to confirm Kepler-10b as a planet were not disappointed. Keck was able to measure tiny changes in the star’s spectrum, called Doppler shifts, caused by the telltale tug exerted by the orbiting planet on the star.

“The discovery of Kepler 10-b is a significant milestone in the search for planets similar to our own,” said Douglas Hudgins, Kepler program scientist at NASA Headquarters in Washington. “Although this planet is not in the habitable zone, the exciting find showcases the kinds of discoveries made possible by the mission and the promise of many more to come,” he said.

Knowledge of the planet is only as good as the knowledge of the star it orbits. Because Kepler-10 is one of the brighter stars being targeted by Kepler, scientists were able to detect high frequency variations in the star’s brightness generated by stellar oscillations, or starquakes. This analysis allowed scientists to pin down Kepler-10b’s properties.

There is a clear signal in the data arising from light waves that travel within the interior of the star. Kepler Asteroseismic Science Consortium scientists use the information to better understand the star, just as earthquakes are used to learn about Earth’s interior structure. As a result of this analysis, Kepler-10 is one of the most well characterized planet-hosting stars in the universe.

That’s good news for the team studying Kepler-10b. Accurate stellar properties yield accurate planet properties. In the case of Kepler-10b, the picture that emerges is of a rocky planet with a mass 4.6 times that of Earth and with an average density of 8.8 grams per cubic centimeter — similar to that of an iron dumbbell.

Ball Aerospace and Technologies Corp. in Boulder, Colo., developed the Kepler flight system and supports mission operations with the Laboratory for Atmospheric and Space Physics at the University of Colorado in Boulder. The Space Telescope Science Institute in Baltimore archives, hosts and distributes the Kepler science data.

Kepler is NASA’s 10th Discovery Mission and is funded by NASA’s Science Mission Directorate at the agency’s headquarters.