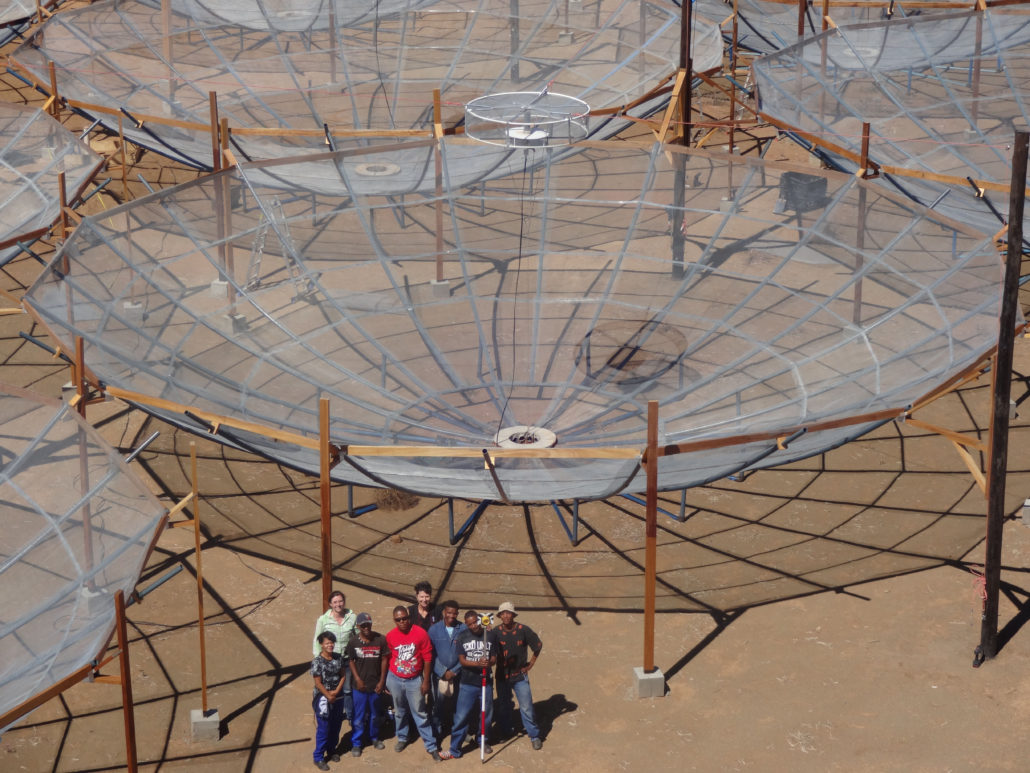 The Hydrogen Epoch of Reionization Array (HERA) radio telescope, located only a few kilometres from the MeerKAT radio telescope, was awarded a grant from the Gordon and Betty Moore Foundation in the US to the value of $5.8 million, equivalent to approximately R75 million.

The construction of HERA started in 2015 and already 35 of the 14-metre diameter dishes have been erected. In September 2016, the National Science Foundation (NSF) invested $9.5 million (equivalent to approximately R124 million) in the project and HERA was granted the status of a Square Kilometre Array (SKA) precursor telescope. The NSF funding allowed the array to expand to 240 radio dishes by 2018. This additional funding injection from the Gordon and Betty Moore Foundation will allow HERA to expand even further to 350 dishes.

This innovative radio telescope will be instrumental in detecting the distinctive signature that would allow astronomers to understand the formation and evolution of the very first luminous sources: the first stars and galaxies in the Universe – a period the scientists call the Epoch of Reionization (EoR).

With the grant from the Gordon and Betty Moore Foundation, the sensitivity of the array can be increased and potentially detect signals coming from a time before the EoR in the history of the Universe, the Cosmic Dawn, roughly 400 million years after the Big Bang. HERA will be able to access a cosmological signal roughly 100,000 times fainter than emissions from the Milky Way and nearby galaxies.

Using this next-generation instrumentation for 21-cm cosmology – the wavelength of neutral hydrogen gas radio waves – HERA will probe the 3D structure of the Universe during the very first appearance of stars, galaxies and black holes. This first generation of hot massive stars and black-hole binaries filled the intergalactic medium with X-rays.

“Observations at the lowest radio frequencies (<100 MHz), allows for observations of the epoch that precedes cosmic reionization where X-rays are expected to have heated the intergalactic medium. As X-rays are expected to be generated by accretion on black holes, observations of this epoch will directly probe the properties of the first black holes formed in the Universe." says Bernardi. HERA comprises a close-packed array of fixed parabolic reflector elements (dishes). The centre position of each dish is determined by the placement of a concrete hub. These hubs constrain radial PVC spars, tensioned into approximate parabolas against a rim, which is supported by utility (telephone) poles. Welded mesh panels are installed on these spars to form the reflector surface. Project Engineer Kathryn Rosie is responsible for HERA's construction in the Karoo and says: "Five local residents, who have been part of the HERA construction crew since 2015, have recently taken up positions as HERA team leaders in anticipation of the crew expansion for the 'big build' in early 2017. In addition to maintaining construction activities, they now have the added responsibility to train new construction team members. The build-out plan for the next construction phase sees five teams working in parallel to achieve the build targets, which require an output of approximately 100 dishes per year, and it is expected that the entire crew contingent will be made up of Karoo residents." Rosie says: "In excess of R1.7 million has been spent thus far with local suppliers in the Karoo to purchase the material with which the telescope is being built. We are proud of the fact that all of the build materials, items, and labour involved in the construction of the reflector elements have been sourced from within South Africa, with most of our bulk materials being sourced from within the Karoo region." Dr Rob Adam, Managing Director of SKA South Africa, says: "The SKA project in the Karoo is progressing very well and this additional funding injection is evidence of the confidence the international community has in the excellent skills and results we are demonstrating. SKA SA remains committed in ensuring that local communities and businesses benefit from the construction of radio telescopes in the Karoo and HERA is a fine example of that." Dr Adam adds: "It is particularly fitting that the man who originated Moore's Law, Gordon Moore, is affiliated to the SKA project through this Gordon and Betty Moore Foundation grant." Gordon Moore is the chairman and co-founder of the Gordon and Betty Moore Foundation. Gordon Moore predicted in 1965 that there will be a steady shrinking of computer chip circuitry. This idea that transistor density would double with each new generation of technology is referred to as the Moore's Law. Notes to Editors

HERA is one of a number of low frequency radio telescopes, including the Murchison Widefield Array (MWA) in Australia and the Low-Frequency Array (LOFAR) in the Netherlands that are pathfinders for SKA1 LOW to be located in Australia.

The SKA is an international effort to build the world’s largest radio telescope – one hundred times more sensitive than any current radio telescope. The scale of the SKA represents a huge leap forward in both engineering and research and development towards building and delivering a unique instrument. As one of the largest scientific endeavours in history, the SKA will bring together a wealth of the world’s finest scientists, engineers and policy makers to bring the project to fruition. SKA will be built in two phases – SKA1 and SKA2 – starting in 2018. SKA1 will include two components – SKA1 MID (to be built in South Africa) and SKA1 LOW (to be built in Australia); they will observe the Universe at different radio frequencies.