In this photo taken on Jan. 26, Juno had just completed tests that simulated the acoustic and vibration environment the spacecraft will experience during launch. The photo shows a Lockheed Martin technician inspecting the Jovian Auroral Distribution Experiment (JADE) instrument just after the test. All three solar array wings are installed and stowed and the large high gain antenna is in place on the top of the avionics vault.

At present, Juno is sealed up in a large thermal vacuum chamber where it is being exposed to the vacuum and extreme hot and cold temperatures it will experience on its voyage to Jupiter. The two-week-long test will simulate many of the flight activities the spacecraft will execute during the mission.

Juno is scheduled to ship from Lockheed Martin’s facility to Kennedy Space Center in early April where it will undergo final preparations for launch. 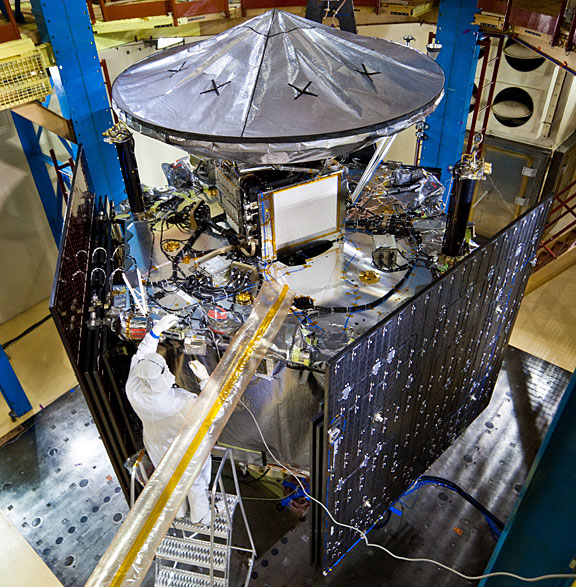 NASA’s Jet Propulsion Laboratory, Pasadena, Calif., manages the Juno mission for the principal investigator, Scott Bolton, of Southwest Research Institute at San Antonio, Texas. Lockheed Martin Space Systems, Denver, Colo., is building the spacecraft. The Italian Space Agency in Rome is contributing an infrared spectrometer instrument and a portion of the radio science experiment. Headquartered in Bethesda, Md., Lockheed Martin is a global security company that employs about 132,000 people worldwide and is principally engaged in the research, design, development, manufacture, integration and sustainment of advanced technology systems, products and services. The Corporation’s 2010 sales from continuing operations were $45.8 billion.

More information about Juno is online at http://www.nasa.gov/juno and http://www.lockheedmartin.com/juno.