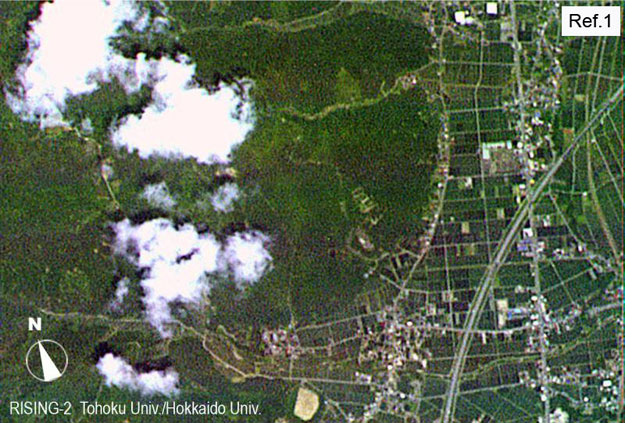 On July 2, Microsatellite Rising-2 succeeded in capturing high precision images of the earth’s surface. Using a High Precision Telescope (HPT), it captured color images at a spatial resolution of 5m, the highest in the world among 50kg-class satellites.

Rising-2 is a microsatellite developed by Tohoku University and Hokkaido University. It was launched from the Tanegashima Space Center, Japan, on May 24, 2014, and has been conducting various test operations. Dayside cloud imagery and night views of city lights and air glow have been acquired so far using a Wide Field-of-view CCD camera (WFC), and high resolution imaging experiments using HPT have recently started. On July 2, Rising-2 succeeded in shooting detailed landscape in sunny spells during the rainy season as shown in the images.

BACKGROUND:
Since 2009, the 43 kg microsatellite, Rising-2, has been developed with a satellite bus system by Tohoku University; with observation equipments by Hokkaido University. It was launched on May 24, 2014, by the JAXA’s H-IIA Rocket. The High Precision Telescope (HPT) is one of the observation equipments onboard Rising-2. The HPT was designed as a compact (length: 38cm, aperture diameter: 10cm, weight: about 3kg,) yet highly capable imaging system to take the world’s first photographic images in 400 spectral bands with 5m GSD (ground sample distance). It utilizes advanced technologies such as a liquid crystal tunable filter (LCTF), which was developed in cooperation with the Sendai National College of Technology, and a mirror using special ceramics. Rising-2 has already succeeded in capturing dayside cloud imagery and night views using a fish-lens CCD camera (WFC) since its launch, and has been trying to take high resolution images with the HPT.

ACHIEVEMENTS:
The Japanese archipelago was viewed during clear weather in the rainy season on July 2, 2014; and high resolution color images of the earth’s surface (RGB tricolor image) were successfully acquired using the HPT. The observation area is about 3.2 km x 2.2 km square of Minami-Uonuma City, Niigata, Japan. Our initial goal was to achieve spatial resolution of 5m at the surface, and this has been attained. This makes Rising-2 the current record holder for high resolution images from a 50-kg microsatellite. These results were achieved by using the sensor technology of the HPT in combination with the advanced control of the satellite bus system. This accomplishment showcases Japan as world leaders in the internationally competitive field of 50-kg microsatellite development. This is also a significant step for 50-kg class micro-satellites to be used in highly practical purposes.

FUTURE PROSPECTS:
With an aim to conduct highly practical observations, operations to establish more accurate control of the satellite attitude are scheduled to be carried out. Rising-2 will also make a challenge to obtain multispectral images with the world’s first space liquid crystal tunable filter (LCTF) that allows wavelength-selection.