ISAS succeeded in deploying a big thin film for solar
sail in space for the first time in the world.

ISAS launched a small rocket S-310-34 from Uchinoura
Space Center in Kagoshima, Japan, at 15:15, August 9,
2004 (Japan Standard Time). The launch was the culmination
of a historic new technology, the world-first successful
full-fledged deployment of big films for solar sail.

A solar sail is a spacecraft without a rocket engine.
It is pushed along directly by light particles from
the Sun, reflecting off its giant sails. Because it
carries no fuel and keeps accelerating over almost unlimited
distances, it is the only technology now in existence
that can one day take us to the stars.

Although both scientists and science-fiction authors
have long foreseen it, no solar sail has ever been launched
until now. It is because superlight material for thin
film which could bear extremely critical environment
in space. Now due to the development of material and
production technology, we can utilize promising film
materials for solar sail, and the experimental deployment
trials toward realization of solar sail have been initiated
in some countries.

The S-310 rocket which was launched from Uchinoura Space
Center at 15:15 of August 9, 2004, carried two kinds
of deploying schemes of films with 7.5 micrometers thickness.
A clover type deployment was started at 100 seconds
after liftoff at 122 km altitude, and a fan type deployment
was started at 169 km altitude at 230 seconds after
liftoff, following the jettison of clover type system.
Both experiments of two types deployment were successful,
and the rocket splashed on the sea at about 400 seconds
after liftoff. 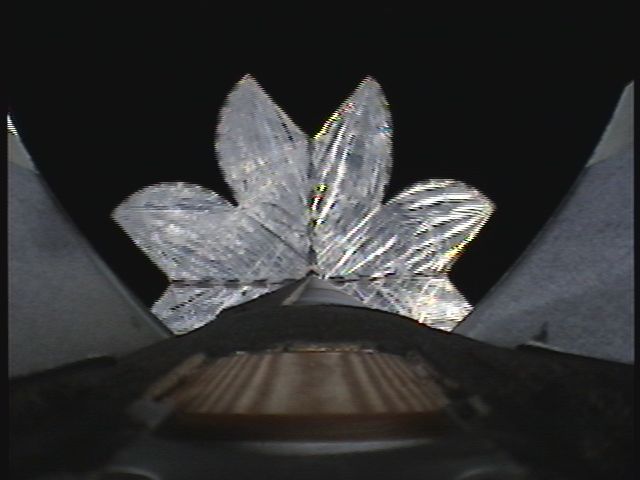 The deployment of clover type film taken by a camera
onboard S-310 rocket. 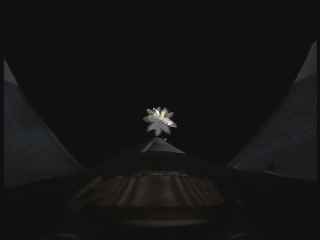 The jettisoned clover type film after separation taken
by a camera onboard S-310 rocket.