The Indian Space Research Organisation, ISRO, which is the National Coordinator for selecting student scientists to participate in the Mars Surveyor Mission of National Aeronautics and Space Administration (NASA) of USA is forwarding the names of the following twelve students to Planetary Society, USA for selection at the international level. 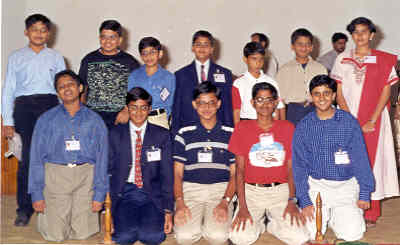 Yesterday (August 22, 2000) 37 students drawn from all over India in three age groups

The idea of student participation in a real Planetary Exploration Mission was mooted by Planetary Society, USA with funding from LEGO Company and other sponsors and in cooperation with NASA, Jet Propulsion Laboratory and Milan Space Science Systems. The students finally selected as `student scientists’ at the international level, will participate in an upcoming Mars Lander Mission. The training to be imparted to the students in this connection has been named `Red Rover Goes to Mars Training Mission’. Student scientists on the training mission will work with actual data from Mars Global Surveyor that is already in orbit around Mars now and control the Mars Orbiter Camera aboard the spacecraft. They will also pick a launching site for a sample return mission to Mars. At a later date, student scientists will travel to Milan Space Science Systems in the United States where the operation of the camera during the Mars Global Surveyor Mission takes place. Then they will develop command sequences for the camera operations of the spacecraft.

The initial selection of the `Student Scientists’ in India was carried out by 16 identified regional centres through a preliminary essay contest. The 1500 word essay was required to define the mission of the Marie Curie Rover and the Lander Robotic Arm on the Mars Surveyor Mission. About 10,000 students participated in the preliminary contest. Of these, about 2000 essays were received by the 16 regional Centres. Of these 200 essays were selected by the regional centre and forwarded to ISRO, which is the identified National Coordination Centre. Out of these 200 essays, 37 essays were short listed after evaluation by a panel of judges.

The 12 students whose essays have now been forwarded by ISRO to Planetary Society, USA, will be required to participate in a brief telephone conference with a group of Judges from USA to discuss the details of their essay. The results of this interview will be used to select the student scientists from about 42 countries. Each of the students will be guided by a mentor during the tele-interview.

The selection of 12 students was announced this afternoon by ISRO.