NASDA’s Office of Research and Development conducts research and development of a variety of technologies. These technologies are planned to be used in the future space programs anytime within a few years to a few decades from today. We have started a new series to introduce just a few of such activities.

The Advanced Mission Research Center investigates future space projects, including manned space flight. In this month’s article, we will introduce one such mission.

Today, two nations, namely the US and Russia, possess the technological capability to send humans into space. China has also made much progress toward developing manned spacecraft.

Well then, what about Japan?

Let us take an example. The H-IIA rocket, which was successfully launched last August, has the capacity to lift 10 tons into low-Earth orbit (LEO). Hence, the H-IIA rocket has far superior lifting capacity than the rockets that sent Russian Vostok 1 in which Gagarin became the first human to orbit the Earth, or the US manned spacecraft Mercury into space. The H-IIA can even lift Russia’s Soyuz spacecraft, which weighs 7.5-tons, with relative ease. Soyuze is a major player in the human space exploration today.

Of course, given the fact that Japan’s rockets are designed for launching satellites, modifications will be required to improve safety and other factors critical to manned missions. Still, Japan has met the requirement the grade in terms of lifting capacity. 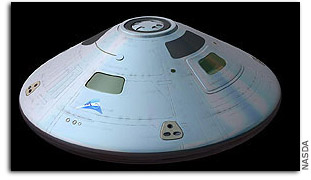 Figure 1 presents a computer graphic image showing the conceptual design of a manned spacecraft. We believe many readers wonder about its appearance. Why a capsule shape? Some people might assume that wingless spacecraft are a thing of the past and that new and future spacecraft should have wings like the Space Shuttle.

Is it true? Must modern spacecraft have wings?

Only the former Soviet Union (Russia) and the U.S. have thus far achieved the manned space mission. Both nations first built capsule-type vehicles because a wingless vehicle is easier to develop than a winged one. The advantages of capsule-type spacecraft lie in their ease of fabrication and high safety achieved with an escape rockets and other features.

The US developed the Space Shuttle after successfully completing missions with three types of capsule spacecraft: Mercury, Gemini and Apollo. Since numerous advanced technologies are required to develop such winged vehicles like the Space Shuttle, it would have been impossible to build the Space Shuttle without experience accumulated through developing the capsule vehicles. Given the fact that Japan has not acquired manned space flight technology, it would be wise to initiate such development with capsule-type spacecraft, which are easier to build than the winged type.

Some people have falsely suggested that winged vehicles are more suitable for future space tourism because they do not experience strong G-forces during acceleration and deceleration. This is not true. We can design and build comfortable capsule spacecraft having fewer G-forces, if we do a good job.

At present, only trained astronauts are permitted to embark on spacecraft. However, we argue that building a spacecraft to provide everyone an opportunity to experience space travel could be a goal as well.

Occasionally large is good, but there are also cases when a small size has its merits.

As shown in Figure 2, a proposed core capsule spacecraft could be modularized to facilitate the expansion of its functions and performance for specific applications. Just like a single lens reflex camera can be used for various applications by changing its lens, the functionality of the proposed spacecraft can be expanded with various interchangeable modules. 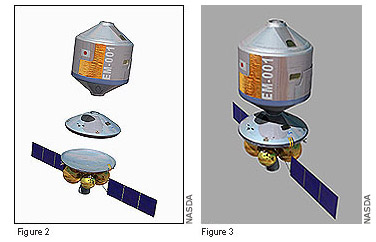 Figure 3 shows a standard configuration for a spacecraft. The central capsule will be used during launch and return to the Earth and could be combined with the upper module to improve habitability in space. The lower module supplies electric power and oxygen, which allows the crew to stay in space for a longer period. Figure 4 shows a configuration that will enable orbital-servicing missions. Manipulators are attached to the upper module for repairing a damaged satellite and to help assemble the International Space Station.

As we have shown, we envision a modular-type spacecraft that can be reconfigurable and useful for a variety of occasions. 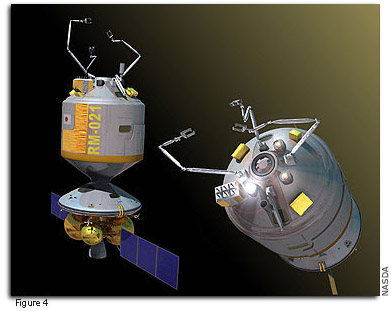