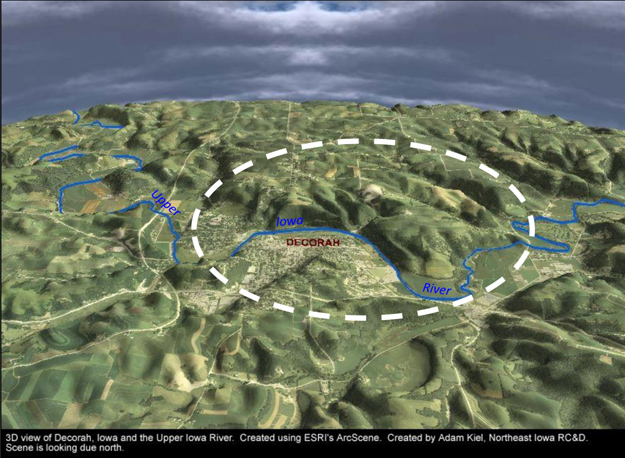 Recent airborne geophysical surveys near Decorah, Iowa are providing an unprecedented look at a 470- million-year-old meteorite crater concealed beneath bedrock and sediments.

The aerial surveys, a collaboration of the U.S. Geological Survey with the Iowa and Minnesota Geological Surveys, were conducted in the last 60 days to map geologic structures and assess the mineral and water resources of the region.

“Capturing images of an ancient meteorite impact was a huge bonus,” said Dr. Paul Bedrosian, a USGS geophysicist in Denver who is leading the effort to model the recently acquired geophysical data. “These findings highlight the range of applications that these geophysical methods can address.”

In 2008-09, geologists from the Iowa Department of Natural Resources’ (Iowa DNR) Iowa Geological and Water Survey hypothesized what has become known as the Decorah Impact Structure. The scientists examined water well drill-cuttings and recognized a unique shale unit preserved only beneath and near the city of Decorah. The extent of the shale, which was deposited after the impact by an ancient seaway, defines a “nice circular basin” of 5.5 km width, according to Robert McKay, a geologist at the Iowa Geological Survey.

Bevan French, a scientist the Smithsonian’s National Museum of Natural History, subsequently identified shocked quartz – considered strong evidence of an extra-terrestrial impact – in samples of sub-shale breccia from within the crater.

“The recognition of this buried geological structure was possible because of the collaboration of a local geologist, water well drillers, the USGS STATEMAP program, and the support of the Iowa DNR concerning research on fundamental aspects of Iowa geology,” said McKay.

The recent geophysical surveys include an airborne electromagnetic system, which is sensitive to how well rocks conduct electricity, and airborne gravity gradiometry, which measures subtle changes in rock density. The surveys both confirm the earlier work and provide a new view of the Decorah Impact Structure. Models of the electromagnetic data show a crater filled with electrically conductive shale and the underlying breccia, which is rock composed of broken fragments of rock cemented together by a fine-grained matrix.

“The shale is an ideal target and provides the electrical contrast that allows us to clearly image the geometry and internal structure of the crater,” Bedrosian said.

More analysis of the data will provide additional detail. These data show the impact as a nearly circular region distinct from the surrounding area to a depth of several hundred meters.

“These data, when coupled with physical property measurements on drill core samples, will form the basis for modeling efforts to constrain the impact geometry and energy of the meteorite,” said Dr. Andy Kass, a USGS geophysicist working on the effort.

The Iowa and Minnesota airborne geophysical surveys are targeting an igneous intrusion, known as the Northeast Iowa Igneous Intrusive complex, that may be similar to the Duluth layered igneous complex exposed in the Lake Superior region of northern Minnesota. Known copper, nickel, and platinum group metal resources were deposited during the formation of the Duluth complex. Both of these complexes are associated with a large structural feature known as the Midcontinent Rift, which is exposed in the Lake Superior Region but is covered by younger rocks as it extends to the south through Iowa, Nebraska, Kansas, and Missouri.

This geophysical survey is part of a larger USGS effort to evaluate the concealed mineral resource potential of the greater Midcontinent Rift region that formed about 1.1 billion years ago.