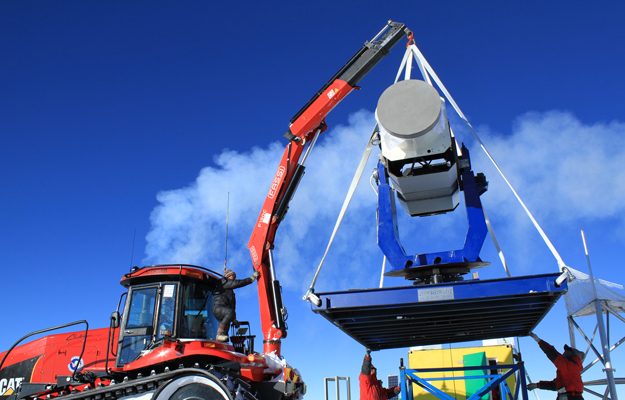 A team of scientists representing several international institutions, including Texas A&M University, has succeeded in installing the first of three Antarctic Survey Telescopes (AST3-1) at the Chinese Kunlun Station at Dome Argus, the highest point of the Antarctic Plateau.

The telescope is the first of three, half-meter devices to be installed at PLATeau Observatory (PLATO-A), a fully robotic observatory established at “Dome A” in 2008 and intended to reveal new insights into the Universe once possible only from space. In combination, the three telescopes are expected to find planets around other stars about the size of Earth, hundreds of supernovaes useful for cosmological studies and many other variable objects relevant to future discoveries in astrophysics.

Texas A&M is joined in the international project by the Chinese Center for Antarctic Astronomy (CCAA) and the University of New South Wales (UNSW), which built PLATO-A and the control computers responsible for its autonomous operation. Dr. Lifan Wang, associate professor of physics and astronomy at Texas A&M, also serves as director of the CCAA.

“This is an astounding achievement,” says Prof. Michael Ashley, head of the UNSW team responsible for PLATO-A. “A stand-alone telescope in the pristine environment of Antarctica can conduct scientific research that would otherwise only be possible from space, but at a few percent of the cost.”

Four years after a making only the second arduous trek to Dome A in history in order to found PLATO-A, the same team returned to finish the latest leg of the adventurous international undertaking led by the Polar Research Institute of China (PRIC). The telescope installation project was carried out over a three-month period by four astronomers as part of China’s 28th Antarctica Expedition. The 26-member team left Tianjin, China, aboard the Xuelong Icebreaker on November 3, reaching the Chinese Zhongshan Station at the Antarctic Coast 26 days later. On December 16, they started their inland traverse, arriving at Dome A on January 4 and completing their installation of the telescope during the subsequent three weeks before returning to Zhongshan Station on February 9.

Among its many unprecedented features, the AST3-1 is equipped with a charge-coupled device (CCD) camera that is 110 megapixels in size — the largest single-piece detector in use in astronomy today. The telescope will be used to search for planets around stars other than the Sun, enabling the continuous monitoring of hundreds of millions of stars in the Milky Way Galaxy, Wang explains.

“The ability to monitor stars during the dark austral winter makes AST3-1 a unique facility for astronomical studies,” Wang adds.

Ashley says the autonomous observatory is accompanied by an onsite computing system that analyzes the massive amount of data from the CCD camera in real-time to catch transient events, such as supernova explosions and gamma-ray-burst afterglows. Supernova explosions, which are caused by the death of massive stars, are visible to distances far beyond the Milky Way Galaxy. Wang notes that it was precise measurements of these explosions in Type Ia supernovae which led to the discovery of accelerated expansion of the Universe — a breakthrough recognized with last year’s Nobel Prize in Physics.

“AST3-1 aims to discover these Type Ia supernovae within one day after they become visible,” Wang says. “Such early discovery is important in resolving the mysterious physics that leads to supernova explosions.”

In addition, the telescope can be used for observations of the optical afterglows of gamma-ray bursts, which are important in early detection of supernovae as well as timely data collection and measurement.

“We are able to process the data from each exposure within two minutes after they are taken to promptly alert the science team when a new supernova occurs,” says Prof. Zhaohui Shang of the National Astronomical Observatory of China and Tianjin Normal University.

Wang says the AST3-1 telescope is fully steerable, meaning it is capable of pointing to any sky area visible from Dome A — a huge technological leap in comparison to CSTAR, an array of four 14.5-centimeter telescopes installed in 2008 which had no moving parts. AST3-1’s CCD camera also employs a frame-transfer-readout scheme that avoids the use of a mechanical shutter, making the overall system much more robust.

Team members say data collected thus far from PLATO-A confirms that Dome A, with its cold temperature, dry air and stable atmosphere, is likely the best site for establishing ground-based astronomical observatories. However, the site is not without its challenges — the least of which is navigation, according to Prof. Xiangqun Cui of the Nanjing Institute of Astronomical Optics Technology (NIAOT).

“The observatory has to withstand the most extreme conditions on Earth,” Cui says. “The winter temperature can be as low as minus 80 degrees Celsius, and the air pressure is barely half that of sea level. It has to be able to prevent ice from building up on mirror surfaces and the telescope support structure.”

To learn more about the AST3-1 telescope and the overall Dome A project, visit http://mcba11.phys.unsw.edu.au/~plato/.

For more on Wang and his research, go to http://dome-a.physics.tamu.edu/~lifanwang.