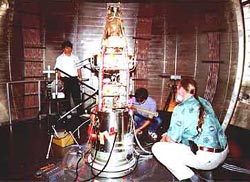 Integration tests for the SS-520-2 were performed at the Flight Environment Test Building over 23 days from August 28th through September 19th. The SS-520-2 is scheduled for launch at the end of November, 2000, from Svalbard Rocket Experiment Site, Norway. It will be launched to an altitude of approximately 1000km with the purpose of understanding the flow mechanisms of ionospheric ion in the “cusp” region at the earth’s polar region where the day-side magnetic lines of force of the earth are concentrated (and where it is known that solar wind energy enters directly).

The efforts of the concerned people made the smooth progress of the subsequent tests possible. Despite the fact that the whole schedule was delayed about one week, and with substantial postponement of the integration on paper, the integration was completed on September 19th. Subsequently, a final function check of all on-board equipment was conducted and the re-combining operation in October. After that, the rocket was shipped to Svalbard for the final operation beginning from the middle of November aiming for launch at the site. 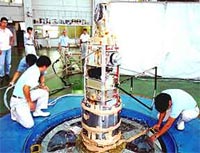 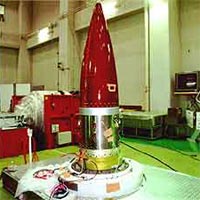