Inmarsat is conducting the Iris Precursor programme with a consortium of leading companies from across the air traffic management, air transport, aeronautics and satcom industries, under the European Space Agency (ESA) umbrella. The programme, which is supported by ESA’s programme of Advanced Research in Telecommunications Systems (ARTES), will deliver services via Inmarsat’s secure next-generation SwiftBroadband-Safety platform.

Four test flights were conducted from Amsterdam under an initial phase to validate the use of satellite-based data link for secure communications and surveillance applications, and compare the capabilities to existing terrestrial data link communications. They were operated on aircraft from the Netherlands Aerospace Centre (NLR) using a prototype of the Iris terminal developed by Honeywell and connected to Inmarsat’s next-generation SwiftBroadband-Safety service through Inmarsat’s aviation partner, SITA, the world’s leading air transport IT and communications specialist.

Each of the flights travelled in different routes, covering all directions to ensure connectivity was maintained as the aircraft crossed satellite beams. The end-to-end connection between the aircraft and SITA’s Controller Pilot Data Link Communication (CPDLC) test ground system was tested extensively and allowed air traffic control messages to be exchanged using Aeronautical Telecommunications Network and Security gateways.

While the Iris Precursor programme will initially focus on continental Europe, it will also benefit air traffic management in other regions around the world in the longer term.

Captain Mary McMillan, Inmarsat’s Vice President of Aviation Safety and Operational Services, said: “Efficiency improvements are fundamental to aviation modernisation programs in Europe. As air traffic volume continues to increase, the digitisation of the cockpit is one of the ways to alleviate current congestion on traditional radio frequencies and optimise European airspace, one of the busiest in the world. Using the power and security of satellite connectivity through Iris clearly changes the game in comparison to the ground technology in use today.

“The successful completion of these flight trials brings Iris Precursor an important step closer to initial operational capability, which is currently targeted for 2019. It demonstrates that the use of satellite technology for dense continental airspace is not only a long-term solution, but also a reliable system in the short-term to solve air traffic management issues today.”

Magali Vaissiere, Director of Telecommunications and Integrated Applications at ESA, said: “ESA’s Iris programme is forging ahead as part of Europe’s long-term goal to modernise air traffic control. A stepped approach and good collaboration between public and private partners is bringing excellent results.”

The flight trials complement a separate test flight that Airbus conducted with Inmarsat and other partners in March this year, as part of the Single European Sky ATM Research (SESAR) programme, which successfully performed initial 4-dimensional/4D flight path control and CPDLC exchanges between aircraft and air traffic control.

Inmarsat is now working toward a second phase of flight trials for Iris at the end of next year. At this point, Iris technology will be considered fully validated. The next phases of the programme include pre-operational validation by flying Iris technology on commercial flights in a real air traffic management environment. The Iris Initial Operational Capability will go live as early as 2019, complementing terrestrial systems and bringing enhanced security, safety and efficiency. 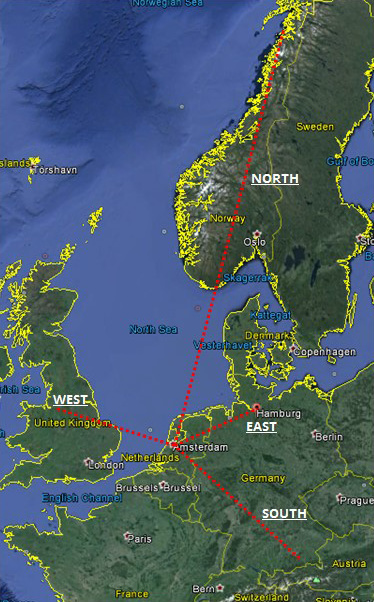 Inmarsat plc is the leading provider of global mobile satellite communications services. Since 1979, Inmarsat has been providing reliable voice and high-speed data communications to governments, enterprises and other organizations, with a range of services that can be used on land, at sea or in the air. Inmarsat operates in more than 60 locations around the world, with a presence in the major ports and centres of commerce on every continent. Inmarsat is listed on the London Stock Exchange (ISAT.L).

The Inmarsat press release newsfeed and corporate updates are on @InmarsatGlobal.

ESA is an intergovernmental organisation, created in 1975, with the mission to shape the development of Europe’s space capability and ensure that investment in space delivers benefits to the citizens of Europe and the world.

ESA has established formal cooperation with six other Member States of the EU. Canada takes part in some ESA programmes under a Cooperation Agreement.

By coordinating the financial and intellectual resources of its members, ESA can undertake programmes and activities far beyond the scope of any single European country. It is working in particular with the EU on implementing the Galileo and Copernicus programmes as well as with EUMETSAT for the development of meteorological missions.

ESA develops the launchers, spacecraft and ground facilities needed to keep Europe at the forefront of global space activities.

Learn more about ESA at www.esa.int