By SpaceRef Editor
October 6, 2017
Filed under Astrobiology, University of Copenhagen, US

Using data captured by the Atacama Large Millimeter/submillimeter Array (ALMA) ALMA in Chile and the ROSINA instrument on ESA’s Rosetta mission, an international team of astronomers including scientists from Harvard University, the University of Cologne, the University of Copenhagen in Denmark, and others, has found faint traces of the chemical compound Freon-40 (CH3Cl), an organohalogen, around both an infant star and a comet in our solar system. This is the first detection ever of a saturated organohalogen in interstellar space. This result has now been published in the journal Nature Astronomy.

Freon-40 is formed by organic processes on Earth, so it has been considered as a marker of extraterrestrial life. But since this is the first ever detection of a saturated organohalogen in interstellar space, it may not be as good marker of life as had been hoped. This discovery of Freon-40 in places that must predate the origin of life can thus be seen as a disappointment. However, organohalogens may be significant components of the material from which planets form. This result underscores the challenge of finding molecules that could indicate the presence of life beyond Earth.

Exoplanet research has gone beyond the point of finding planets – more than 3,000 exoplanets are now known – to looking for chemical markers that might indicate the potential presence of life. A vital step is determining which molecules could indicate life, but establishing reliable markers remains a tricky process. 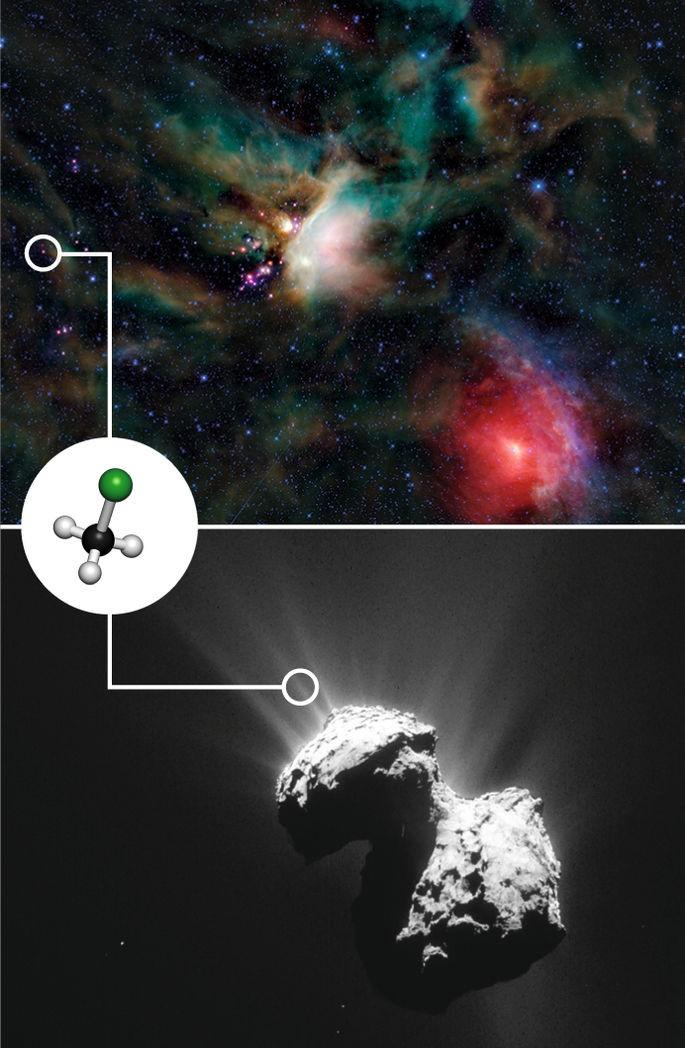 Freon-40 is also known as methyl chloride and chloromethane, and was detected around both the infant star system IRAS 16293-2422 [1], about 400 light-years away, and the famous comet 67P/Churyumov-Gerasimenko (67P/C-G). Organohalogens consist of halogens such as chlorine and fluorine, bonded with carbon and sometimes other elements. On Earth, methyl chloride is created by biological processes – in organisms ranging from humans to fungi – as well as by industrial processes such as the production of dyes and medical drugs. ‘Finding Freon-40 near these young, Sun-like stars was surprising’, said Edith Fayolle, a researcher with the Harvard-Smithsonian Center for Astrophysics in Cambridge, Massachusetts, and lead author of the new paper. ‘We did not predict its formation and were surprised to find it in such significant concentrations. It has now become clear that these molecules form readily in stellar nurseries, providing insights into the chemical evolution of planetary systems.’

The discovery of organohalogens in the interstellar medium also tells the researchers something about the starting conditions for organic chemistry on planets. Such chemistry is an important step toward the origins of life. Organohalogens, the findings suggest, are likely to be a constituent of the so-called ‘primordial soup’ – both on the young Earth and on nascent rocky exoplanets.

Thus, rather than indicating the presence of existing life, organohalogens may be an important element in the little-understood chemistry involved in the origin of life. Co-author Jes Joergensen from the Niels Bohr Institute at University of Copenhagen adds: ‘This result shows the power of ALMA to detect molecules of astrobiological interest toward young stars on scales where planets may be forming. Using ALMA, we have previously found precursors to sugars and amino acids around different stars. The additional discovery of Freon-40 around Comet 67P/C-G strengthens the links between the pre-biological chemistry of distant protostars and our own Solar System.’ Holger Mueller, a spectroscopist at the University of Cologne’s Institute of Physics I and a co-author of the study, says: ‘The identification of molecules in space usually relies on laboratory studies of these molecules.’ He maintains the Cologne Database for Molecular Spectroscopy, CDMS, an important repository of data to identify interstellar molecules. He helped to identify the compound’s spectral fingerprints, and thus to verify their occurrences in outer space.

Protostellar and Cometary Detections of Organohalogens