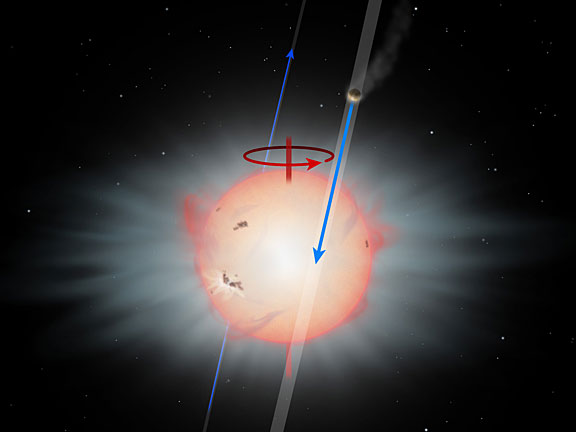 A research team led by astronomers from the University of Tokyo and the National Astronomical Observatory of Japan (NAOJ) has discovered that inclined orbits may be typical rather than rare for exoplanetary systems. Their measurements of the angles between the axes of the star’s rotation (stellar rotational axis) and the planet’s orbit (planetary orbital axis) of exoplanets HAT-P-11b and XO-4b demonstrate that these exoplanets’ orbits are highly tilted. This is the first time that scientists have measured the angle for a small planet like HAT-P-11 b. The new findings provide important observational indicators for testing different theoretical models of how the orbits of planetary systems have evolved.

Since the discovery of the first exoplanet around a normal star in 1995, scientists have identified more than 500 exoplanets, nearly all of which are giant planets and most of which closely orbit their host stars. Accepted theories propose that these giant planets originally formed from abundant planet-forming materials far from their host stars and then migrated to their current close locations. Different migration processes have been suggested to explain close-in giant exoplanets.

Planet-planet interaction models of migration have focused on mutual scatterings among giant planets during the creation of two or more giant planets within the protoplanetary disk. Although some of the planets scatter from the system, the innermost one may establish a final orbit very close to the central star. Another planet-planet interaction scenario, Kozai migration, postulates that the long-term gravitational interaction between an inner giant planet and another celestial object may alter the planet’s orbit, moving an inner planet closer to the central star. Such planet-planet migration scenarios could produce an inclined orbit between the planet and the stellar axis.

Overall, the inclination of the orbital axes of close-in planets relative to the host stars’ spin axes emerges as a very important observational basis for supporting or refuting migration models upon which theories of orbital evolution center. A research group led by astronomers from the University of Tokyo and NAOJ concentrated their observations with the Subaru Telescope on investigating these inclinations for two systems known to have planets: HAT-P-11 and XO-4. The group measured the Rossiter-McLaughlin (hereafter RM) effect of the systems and found evidence that their orbital axes incline relative to the spin axes of their host stars.

The RM effect refers to apparent irregularities in the radial velocity or speed of a celestial object in the observer’s line of sight during planetary transits. Unlike the spectral lines that are generally symmetrical in measures of radial velocity, those with the RM effect deviate into an asymmetrical pattern (see Figure 1). Such apparent variation in radial velocity during a transit reveals the sky-projected angle between the stellar spin axis and planetary orbital axis. Subaru Telescope has participated in previous discoveries of the RM effect, which scientists have investigated for approximately thirty-five exoplanetary systems thus far.

In January 2010, a research team led by the current team’s astronomers from the University of Tokyo and the National Astronomical Observatory of Japan used the Subaru Telescope to observe the planetary system XO-4, which lies 960 light-years away from Earth in the Lynx region. The system’s planet is about 1.3 times as massive as Jupiter and has a circular orbit of 4.13 days. Their detection of the RM effect showed that the orbital axis of the planet XO-4 b tilts to the spin axis of the host star (see Figure 3). Only the Subaru Telescope has measured the RM effect for this system so far.

In May and July 2010, the current research team conducted targeted observations of the HAT-P-11 exoplanetary system, which lies 130 light-years away from the Earth toward the constellation Cygnus. The Neptune-sized planet HAT-P-11 b orbits its host star in a non-circular (eccentric) orbit of 4.89 days and is among the smallest exoplanets ever discovered. Until this research, scientists had only detected the RM effect for giant planets. The detection of the RM effect for smaller-sized planets is challenging because the signal of the RM effect is proportional to the size of the planet; the smaller the transiting planet, the fainter the signal.

The team took advantage of the enormous light-collecting power of the Subaru Telescope’s 8.2m mirror as well as the precision of its High Dispersion Spectrograph. Their observations not only resulted it the first detection of the RM effect for a smaller Neptune-sized exoplanet but also provided evidence that the orbital axis of the planet inclines to the stellar spin axis by approximately 103 degrees in the sky (see Figure 2).

The current team’s observations of the RM effect for the planetary systems HAT-P-11 and XO-4 have shown that they have planetary orbits highly tilted to the spin axes of their host stars (see Figure 4). The latest observational results about these systems, including those obtained independently of the findings reported here, suggest that such highly inclined planetary orbits may commonly exist in the universe. Planet-planet interaction models of migration, whether caused by planet-planet scattering or Kozai migration could account for their migration to the present locations.

However, measurements of the RM effect for individual systems cannot definitively discriminate between the migration scenarios. Since different migration models predict different distributions of the angle between the stellar axis and planetary orbit, developing a large sample of the RM effect enables scientists to perform statistical analyses to support the most plausible migration process. A sample’s inclusion of the measurements of the RM effect for such a small-sized planet as HAT-P-11 b will play an important role in understanding the formation and migration history of planetary systems.

1) The Kozai migration model is based on the Kozai cycle introduced in 1962 by Yoshihide Kozai, the founding Director General of the National Astronomical Observatory of Japan.

2) For figures associated with this article, visit the Subaru Telescope’s website at www.SubaruTelescope.org and look under ‘science Results.’

Figure 1: Schematic Diagram of the Rossiter-McLaughlin (RM) Effect Because of stellar rotation called ‘spin’, the stellar surface or ‘disk’ has two parts: the approaching side (blue) and the receding side (red). During a planetary passage or ‘transit’, the observed radial velocity (RV) or speed of the star exhibits an apparent irregularity because of the stellar spin. When the transiting planet blocks the approaching side of the disk (blue), the star appears to be receding, and the RV shows an apparent red-shift. When the transiting planet conceals the receding side of the stellar disk, the star appears to be approaching, and the RV exhibits an apparent blue-shift. These anomalous RV shifts occur along the trajectory of the planet relative to the stellar disk.

The diagram shows two different trajectories. The left panels indicate alignment between the stellar spin axis and the planetary orbital axis while the right panels show misalignment of the two axes by 50 degrees. Therefore, precise measurements of RVs during a planetary transit enable an estimation of the angle between the two axes.

Figure 2: The RM Effect in HAT-P-11 System Based on May 2010 Observations at the Subaru Telescope

The bottom panel shows the RV residuals from the best-fit curve. Residuals are measurements from the observations minus those for best-fit.

Figure 3: The RM Effect in the XO-4 System Based on January 2010 Observations at the Subaru Telescope

Measurements of the RVs taken by the Subaru Telescope are shown in relation to two lines: 1) a solid line that shows the best-fit curve and 2) a dotted line that shows a model curve, assuming a perfect spin-orbit alignment.

Figure 4: Illustration of the HAT-P-11 System Based on Observations from Subaru Telescope

A planet orbits the star in a highly inclined orbit.