By SpaceRef Editor
February 22, 2012
Filed under Commerce, Harvard University, US 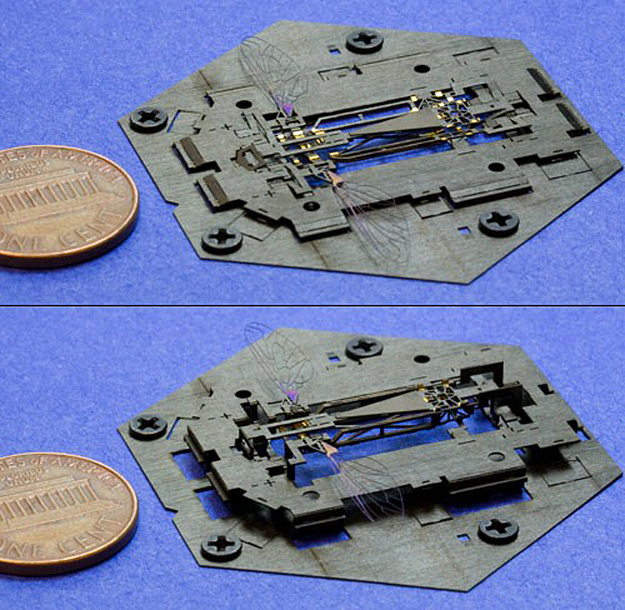 The Harvard Monolithic Bee (or “Mobee”) pops up within an assembly scaffold, which performs more than 20 origami assembly folds. Photos courtesy of Pratheev Sreetharan.

A new technique inspired by elegant pop-up books and origami will soon allow clones of robotic insects to be mass-produced by the sheet. Devised by engineers at Harvard, the ingenious layering and folding process enables the rapid fabrication of not just microrobots, but a broad range of electromechanical devices. In prototypes, 18 layers of carbon fiber, Kapton (a plastic film), titanium, brass, ceramic, and adhesive sheets have been laminated together in a complex, laser-cut design. The structure incorporates flexible hinges that allow the three-dimensional product–just 2.4 millimeters tall–to assemble in one movement, like a pop-up book. 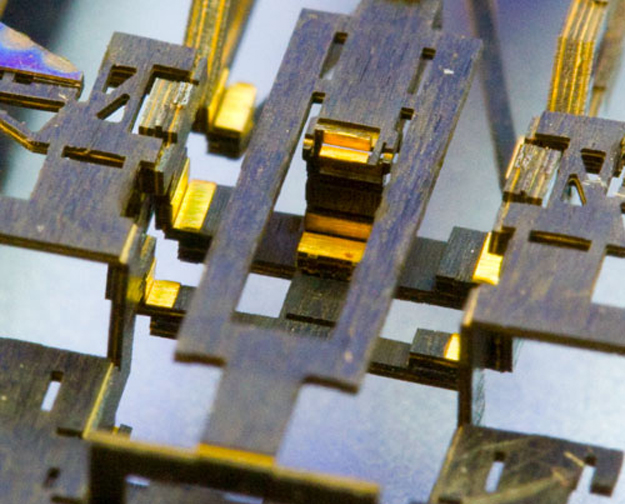 A close-up view of part of a pop-up microrobot, showing the device’s transmission. Each flat section comprises up to 18 layers of material. Photo courtesy of Pratheev Sreetharan.

The entire product is approximately the size of a U.S. quarter, and dozens of these microrobots could be fabricated in parallel on a single sheet. “This takes what is a craft, an artisanal process, and transforms it for automated mass production,” says Pratheev Sreetharan (A.B. ’06, S.M. ’10), who co-developed the technique with J. Peter Whitney. Both are doctoral candidates at the Harvard School of Engineering and Applied Sciences (SEAS).

Sreetharan, Whitney, and their colleagues in the Harvard Microrobotics Laboratory at SEAS have been working for years to build bio-inspired, bee-sized robots that can fly and behave autonomously as a colony. Appropriate materials, hardware, control systems, and fabrication techniques did not exist prior to the RoboBees project, so each must be invented, developed, and integrated by a diverse team of researchers.

Less than a year ago, the group was using a painstaking and error-prone method to fold, align, and secure each of the minuscule parts and joints.

“You’d take a very fine tungsten wire and dip it in a little bit of superglue,” explains Sreetharan. “Then, with that tiny ball of glue, you’d go in under a microscope like an arthroscopic surgeon and try to stick it in the right place.” “Until recently, the manual assembly process was the state of the art in this field,” Sreetharan adds.

The same result can now be achieved–without human error–through locking mechanisms and dip soldering. The new process also enables the use of cured carbon fiber, which is rigid and easy to align, rather than uncured carbon fiber, which Sreetharan compares to “wet tissue paper.” “Our new techniques allow us to use any material including polymers, metals, ceramics, and composites,” says principal investigator Rob Wood, an Associate Professor of Electrical Engineering at SEAS and a Core Faculty Member at the Wyss Institute for Biologically Inspired Engineering at Harvard.

“The ability to incorporate any type and number of material layers, along with integrated electronics, means that we can generate full systems in any three-dimensional shape,” Wood says. “We’ve also demonstrated that we can create self-assembling devices by including pre-stressed materials.”

The implications of this novel fabrication strategy go far beyond these micro-air vehicles. The same mass-production technique could be used for high-power switching, optical systems, and other tightly integrated electromechanical devices that have parts on the scale of micrometers to centimeters. Moreover, the layering process builds on the manufacturing process currently used to make printed circuit boards, which means that the tools for creating large sheets of pop-up devices are common and abundant. It also means that the integration of electrical components is a natural extension of the fabrication process–particularly important for the size- and weight-constrained RoboBees project. “In a larger device, you can take a robot leg, for example, open it up, and just bolt in circuit boards. We’re so small that we don’t get todo that. I can’t put a structural mechanism in here and have it serve no electrical function.”

Pointing to the carbon-fiber box truss that constitutes the pop-up bee’s body frame, Sreetharan says, “Now, I can put chips all over that. I can build in sensors and control actuators.” 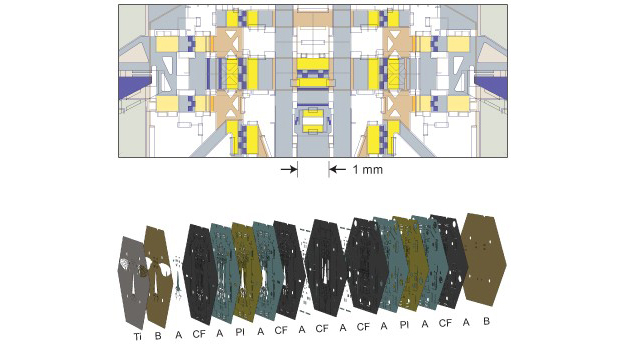 A small portion of the CAD design for the Harvard Monolithic Bee illustrates the complexity of folds and joints necessary for its assembly. Using the old, manual process, every one of those parts would have to be cut, folded, assembled, and glued by hand. The bottom image illustrates the 18 layers of laser-cut materials that create the pop-up structure. Images courtesy of Pratheev Sreetharan.

Essentially, tiny robots can now be built by slightly bigger robots. Designing how all of the layers will fit together and fold, however, is still a very human task, requiring creativity and expertise. Standard computer-aided design (CAD) tools, typically intended for either flat, layered circuit boards or 3D objects, do not yet support devices that combine both.

Once the design is complete, though, fabrication can be fully automated, with accuracy and precision limited only by the machining tools and materials.

“The alignment is now better than we can currently measure,” says Sreetharan. “I’ve verified it to better than 5 microns everywhere, and we’ve gone from a 15% yield to–well, I don’t think I’ve ever had a failure.”

The full fabrication process will be described in the March issue of the Journal of Micromechanics and Microengineering. Co-authors and collaborators, beside Whitney, Sreetharan, and Wood, include Kevin Ma, a graduate student at SEAS; and Marc Strauss, a research assistant in Wood’s lab.

The Harvard Office of Technology Development is now developing a strategy to commercialize this technology. As part of this effort, they have filed patent applications on this work and are engaging with entrepreneurs,venture capitalists, and companies to identify disruptive applications in a range of industries.

The work was supported by the U.S. Army Research Laboratory, the National Science Foundation (through the Expeditions in Computing program), and the Wyss Institute.