Image of Io Captures One of the Brightest Volcanoes Ever Seen 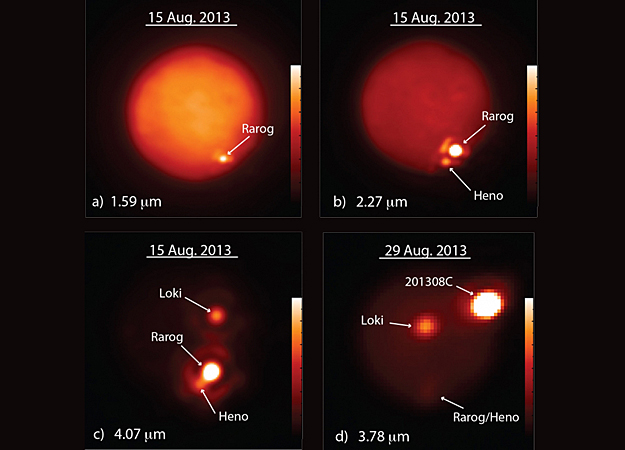 During the middle of 2013, Jupiter’s moon Io came alive with volcanism. Now, an image from the Gemini Observatory captures what is one of the brightest volcanoes ever seen in our solar system. The image, obtained on August 29, reveals the magnitude of the eruption that was the “grand finale” in a series of eruptions on the distant moon. Io’s volcanism is caused by the tidal push-and-pull of massive Jupiter, which heats the satellite’s interior — making it our solar system’s most volcanically active known body.

According to University of California, Berkeley (UCB), astronomer Katherine de Kleer, the Gemini observations “represent the best day-by-day coverage of such an eruption — thanks to Gemini’s rapid and flexible scheduling capabilities.” De Kleer, who led one of a pair of two papers published today in the journal Icarus, adds that the Gemini data allowed the team to monitor the evolution of the extreme volcanic activity over nearly the first two weeks of the eruption — which provided a critical new perspective on the outburst events.

De Kleer’s paper examines the powerful late-August eruption in detail, concluding that the energy emitted was about 20 terawatts and expelled many cubic kilometers of lava. “At the time we observed the event, an area of newly-exposed lava on the order of tens of square kilometers was visible” says de Kleer. “We believe that it erupted in fountains from long fissures on Io’s surface, which were over ten-thousand-times more powerful than the lava fountains during the 2010 eruption of Eyjafjallajokull, Iceland, for example.”

The original detection of the volcano was made simultaneously at Gemini and NASA’s Infrared Telescope Facility (IRTF) and was the first of a series of observations monitoring Io at both facilities over the following year. These particular observations were timed to follow up on a different outburst eruption that was detected earlier in the month by Imke de Pater, also of UCB.

This record of the spate of activity began when de Pater first spotted a hotspot using the W. M. Keck Observatory in mid-August, which the team followed with further observations from Mauna Kea. The late August Gemini observations of the most extreme outburst (Figure 1) used adaptive optics on the Gemini North telescope to produce this super-sharp near-infrared image. Gemini also recorded a series of images chronicling the massive eruption’s evolution as it faded over the next 12 days (Figure 2).

In addition to de Kleer and de Pater, the lead authors on the two publications discussing these events, the research team included Máté Ádámkovics of UCB, Ashley Davies from the Jet Propulsion Laboratory, and David Ciardi of Caltech’s NASA Exoplanet Science Institute. The work is funded by the National Science Foundation and NASA’s Outer Planets Research and Planetary Geology and Geophysics Program.

Figure 1:
http://www.gemini.edu/images/pio/News/2014/wf2014_08/fig1.jpg
Image of Io taken in the near-infrared with adaptive optics at the Gemini North telescope on August 29. In addition to the extremely bright eruption on the upper right limb of the satellite, the lava lake Loki is visible in the middle of Io’s disk, as well as the fading eruption that was detected earlier in the month by de Pater on the southern (bottom) limb. Io is about one arcsecond across. Credit: Katherine de Kleer/UC Berkeley/Gemini Observatory/AURA

Figure 2:
http://www.gemini.edu/images/pio/News/2014/wf2014_08/fig2.jpg
Images of Io taken in the near-infrared with adaptive optics at the Gemini North telescope tracking the evolution of the eruption as it decreased in intensity over 12 days. Due to Io’s rapid rotation, a different area of the surface is viewed on each night; the outburst is visible with diminishing brightness on August 29 & 30 and September 1, 3, & 10. Credit: Katherine de Kleer/UC Berkeley/Gemini Observatory/AURA

The Gemini Observatory is an international collaboration with two identical 8-meter telescopes. The Frederick C. Gillett Gemini Telescope is located on Mauna Kea, Hawai’i (Gemini North) and the other telescope on Cerro Pachón in central Chile (Gemini South); together the twin telescopes provide full coverage over both hemispheres of the sky. The telescopes incorporate technologies that allow large, relatively thin mirrors, under active control, to collect and focus both visible and infrared radiation from space.