By SpaceRef Editor
October 19, 2017
Filed under Aerojet Rocketdyne, Commerce, US 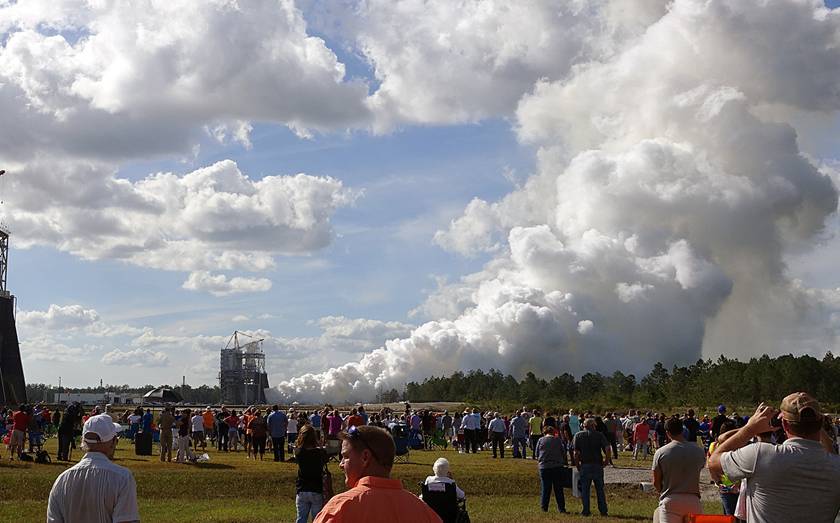 EM-2 will be the first mission to launch astronauts aboard the Orion spacecraft with the Exploration Upper Stage (EUS) on top of the Space Launch System (SLS).

“This is an exciting time in human spaceflight as we move beyond low Earth orbit and into deep space,” said Aerojet Rocketdyne CEO and President Eileen Drake. “SLS and Orion play critical roles in establishing NASA’s proposed deep space gateway and returning humans to the vicinity of the Moon.”

Each SLS rocket is powered by four RS-25 engines located at the bottom of the core stage along with two solid rocket motors. The RS-25 engines fire nonstop for 8.5 minutes and provide more than two million pounds of thrust. Aerojet Rocketdyne assembled engine E2063 in 2015, making it the newest of the 16 flight engines Aerojet Rocketdyne has in inventory at its facility located at Stennis Space Center.

“Earlier this month we completed work on all four engines required for Exploration Mission-1 and we are now well on our way to getting the four engines needed for EM-2 ready to go,” added RS-25 Program Director Dan Adamski. “You can really start to feel the excitement as flight hardware is coming together across the country for both SLS and Orion.”

Aerojet Rocketdyne is an innovative company delivering solutions that create value for its customers in the aerospace and defense markets. The company is a world-recognized aerospace and defense leader that provides propulsion and energetics to the space, missile defense and strategic systems, tactical systems and armaments areas, in support of domestic and international markets. Additional information about Aerojet Rocketdyne can be obtained by visiting our websites at www.Rocket.com and www.AerojetRocketdyne.com.