Hubble Zooms In on a Space Oddity 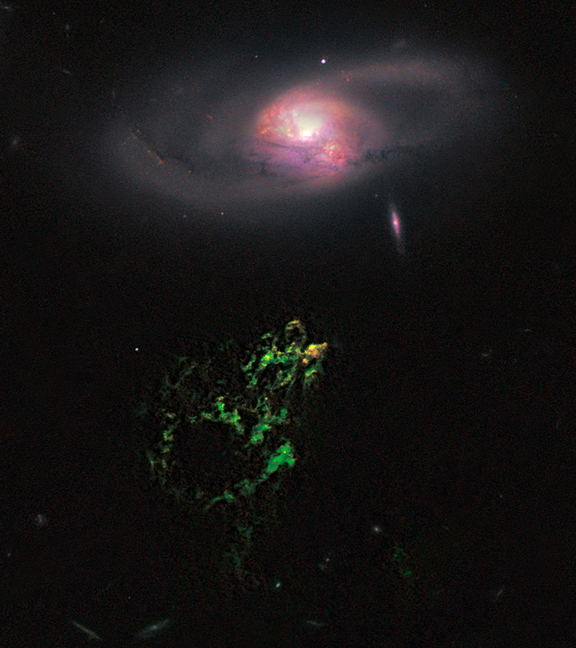 One of the strangest space objects ever seen is being scrutinized by the penetrating vision of NASA’s Hubble Space Telescope. A mysterious, glowing, green blob of gas is floating in space near a spiral galaxy. Hubble uncovered delicate filaments of gas and a pocket of young star clusters in the giant object, which is the size of our Milky Way galaxy.

The Hubble revelations are the latest finds in an ongoing probe of Hanny’s Voorwerp (Hanny’s Object in Dutch), named for Hanny van Arkel, the Dutch teacher who discovered the ghostly structure in 2007 while participating in the online Galaxy Zoo project. Galaxy Zoo enlists the public to help classify more than a million galaxies catalogued in the Sloan Digital Sky Survey. The project has expanded to include the Hubble Zoo, in which the public is asked to assess tens of thousands of galaxies in deep imagery from the Hubble Space Telescope.

In the sharpest view yet of Hanny’s Voorwerp, Hubble’s Wide Field Camera 3 and Advanced Camera for Surveys have uncovered star birth in a region of the green object that faces the spiral galaxy IC 2497, located about 650 million light-years from Earth. Radio observations have shown an outflow of gas arising from the galaxy’s core. The new Hubble images reveal that the galaxy’s gas is interacting with a small region of Hanny’s Voorwerp, which is collapsing and forming stars. The youngest stars are a couple of million years old.

“The star clusters are localized, confined to an area that is over a few thousand light-years wide,” explains astronomer William Keel of the University of Alabama in Tuscaloosa, leader of the Hubble study. “The region may have been churning out stars for several million years. They are so dim that they have previously been lost in the brilliant light of the surrounding gas.”

Recent X-ray observations have revealed why Hanny’s Voorwerp caught the eye of astronomers. The galaxy’s rambunctious core produced a quasar, a powerful light beacon powered by a black hole. The quasar shot a broad beam of light in Hanny’s Voorwerp’s direction, illuminating the gas cloud and making it a space oddity. Its bright green color is from glowing oxygen.

“We just missed catching the quasar, because it turned off no more than 200,000 years ago, so what we’re seeing is the afterglow from the quasar,” Keel says. “This implies that it might flicker on and off, which is typical of quasars, but we’ve never seen such a dramatic change happen so rapidly.”

The quasar’s outburst also may have cast a shadow on the blob. This feature gives the illusion of a gaping hole about 20,000 light-years wide in Hanny’s Voorwerp. Hubble reveals sharp edges around the apparent opening, suggesting that an object close to the quasar may have blocked some of the light and projected a shadow on Hanny’s Voorwerp. This phenomenon is similar to a fly on a movie projector lens casting a shadow on a movie screen.

The quasar, the outflow of gas that instigated the star birth, and the long, gaseous tidal tail point to a rough life for IC 2497.

“The evidence suggests that IC 2497 may have merged with another galaxy about a billion years ago,” Keel explains. “The Hubble images show in exquisite detail that the spiral arms are twisted, so the galaxy hasn’t completely settled down.”

In Keel’s scenario, the merger expelled the long streamer of gas from the galaxy and funneled gas and stars into the center, which fed the black hole. The engorged black hole then powered the quasar, which launched two cones of light. One light beam illuminated part of the tidal tail, now called Hanny’s Voorwerp.

About a million years ago, shock waves produced glowing gas near the galaxy’s core and blasted it outward. The glowing gas is seen only in Hubble images and spectra, Keel says. The outburst may have triggered star formation in Hanny’s Voorwerp. Less than 200,000 years ago, the quasar dropped in brightness by 100 times or more, leaving an ordinary-looking core.

New images of the galaxy’s dusty core from Hubble’s Space Telescope Imaging Spectrograph show an expanding bubble of gas blown out of one side of the core, perhaps evidence of the sputtering quasar’s final gasps. The expanding ring of gas is still too small for ground-based telescopes to detect.

“This quasar may have been active for a few million years, which perhaps indicates that quasars blink on and off on timescales of millions of years, not the 100 million years that theory had suggested,” Keel says. He added that the quasar could light up again if more material is dumped around the black hole.

Keel is presenting his results on Jan. 10, 2011, at the American Astronomical Society meeting in Seattle, Wash.