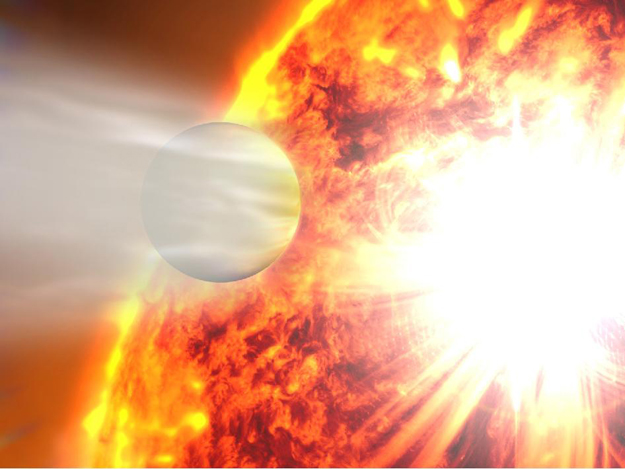 An international team of astronomers using data from NASA’s Hubble Space Telescope made an unparalleled observation, detecting significant changes in the atmosphere of a planet located beyond our solar system.

Exoplanet HD 189733b lies so near its star that it completes an orbit every 2.2 days. In late 2011, NASA’s Hubble Space Telescope found that the planet’s upper atmosphere was streaming away at speeds exceeding 300,000 mph. Just before the Hubble observation, NASA’s Swift detected the star blasting out a strong X-ray flare, one powerful enough to blow away part of the planet’s atmosphere.

The exoplanet is a gas giant similar to Jupiter, but about 14 percent larger and more massive. The planet circles its star at a distance of only 3 million miles, or about 30 times closer than Earth’s distance from the sun. Its star, named HD 189733A, is about 80 percent the size and mass of our sun.

This artist’s rendering illustrates the evaporation of HD 189733b’s atmosphere in response to a powerful eruption from its host star.