By stretching the capabilities of NASA’s Hubble Space Telescope to the limit, astronomers photographed the close companion to Polaris, known also as the North Star, for the first time.

“Hubble’s exceptional pointing capabilities combined with the wonderful performance of its instruments allow scientists to see the universe in finer detail than ever before,” said Michael Moore, NASA’s Hubble program executive. “It is that clear vision that makes these types of images possible,” he added.

The North Star is thought to be a steady, solitary point of light that guided sailors for ages, but there is more to this star than meets the eye. The North Star is actually a triple star system. While one companion is easily viewed with small telescopes, the other hugs Polaris so tightly that it has never been seen until now.

“The star we observed is so close to Polaris that we needed every available bit of Hubble’s resolution to see it,” said astronomer Nancy Evans of the Harvard-Smithsonian Center for Astrophysics, Cambridge, Mass. The companion proved to be less than two-tenths of an arcsecond from Polaris. That is an incredibly tiny angle equivalent to the apparent diameter of a quarter located 19 miles away. At the system’s distance of 430 light-years from Earth, that translates into a separation of about 2 billion miles. 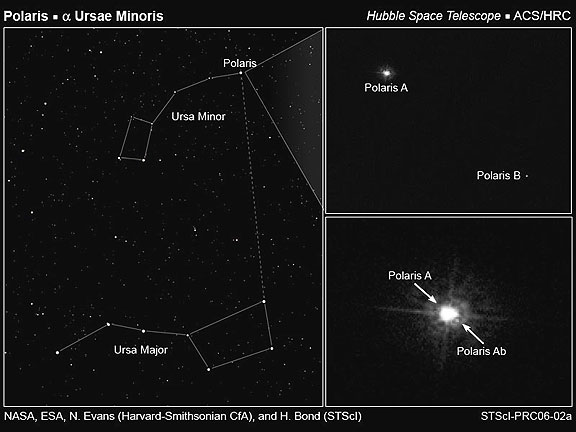 “The brightness difference between the two stars made it even more difficult to resolve them,” said astronomer Howard Bond of the Space Telescope Science Institute, Baltimore. Polaris is a super-giant more than two thousand times brighter than the sun, while its companion is a dwarf star. “With Hubble, we’ve pulled the North Star’s companion out of the shadows and into the spotlight,” he said.

“Our ultimate goal is to get the accurate mass for Polaris,” Evans said. “To do that, the next milestone is to measure the motion of the companion in its orbit,” she added. Astronomers want to determine the mass of Polaris, because it is the nearest Cepheid variable star. Cepheids’ brightness variations are used to measure the distances of galaxies and the expansion rate of the universe. It is essential to understand their intrinsic physics makeup and evolution. Knowing their mass is the most important ingredient in this understanding.

The researchers plan to continue observing the Polaris system for several years. The movement of the small companion during its 30-year orbit around the primary should be detectable. The researchers presented their data today during the 207th meeting of the American Astronomical Society in Washington.

The Hubble Space Telescope is a project of international cooperation between NASA and the European Space Agency. The Space Telescope Science Institute in Baltimore conducts Hubble science operations. The Institute is operated for NASA by the Association of Universities for Research in Astronomy, Inc., Washington.

For images and additional information about this research on the Web, visit: http://hubblesite.org/news/2006/02

For information about NASA and agency programs on the Web, visit: http://www.nasa.gov/home