The appearance of a galaxy can depend strongly on the color
of the light with which it is viewed. The Hubble Heritage image
of NGC 6782 illustrates a pronounced example of this effect. This
spiral galaxy, when seen in visible light, exhibits tightly wound
spiral arms that give it a pinwheel shape similar to that of many
other spirals. However, when the galaxy is viewed in ultraviolet
light with NASA’s Hubble Space Telescope, its shape is startlingly
different.

Ultraviolet light has a shorter wavelength than ordinary visible
light, and is emitted from stars that are much hotter than the Sun.
At ultraviolet wavelengths, which are rendered as blue in the Hubble
image, NGC 6782 shows a spectacular, nearly circular bright ring
surrounding its nucleus. The ring marks the presence of many recently
formed hot stars.

Two faint, dusty spiral arms emerge from the outer edge of the
blue ring and are seen silhouetted against the golden light of older
and fainter stars. A scattering of blue stars at the outer edge
of NGC 6782 in the shape of two dim spiral arms shows that some
star formation is occurring there too. The inner ring surrounds
a small central bulge and a bar of stars, dust, and gas. This ring
is itself part of a larger dim bar that ends in these two outer
spiral arms. Astronomers are trying to understand the relationship
between the star formation seen in the ultraviolet light and how
the bars may help localize the star formation into a ring. 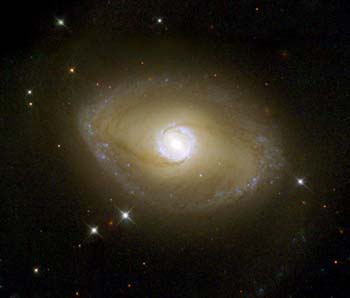 NGC 6782 is a relatively nearby galaxy, residing about 183 million
light-years from Earth. The light from galaxies at much larger distances
is stretched to longer, redder wavelengths [“redshifted”], due to
the expansion of the universe. This means that if astronomers want
to compare visible-light images of very distant galaxies with galaxies
in our own neighborhood, they should use ultraviolet images of the
nearby ones. Astronomers find that the distant galaxies tend to
have different structures than nearby ones, even when they use the
correct procedure of comparing visible light in distant galaxies
with ultraviolet light from nearby ones. Since the distant galaxies
are seen as they were billions of years ago, such observations are
evidence that galaxies evolve with time.

The Hubble image of NGC 6782 was taken with the Wide Field Planetary
Camera 2 (WFPC2) in June 2000 as part of an ultraviolet survey of
37 nearby galaxies. The observations were carried out by an international
“Hubble mid-UV team” led by Dr. Rogier Windhorst of Arizona State
University. Additional observations of NGC 6782 were made by the
Hubble Heritage Team in June 2001. The color image was produced
by combining data from both observing programs that were taken through
color filters in the WFPC2 camera that isolated ultraviolet, blue,
visible, and infrared light.