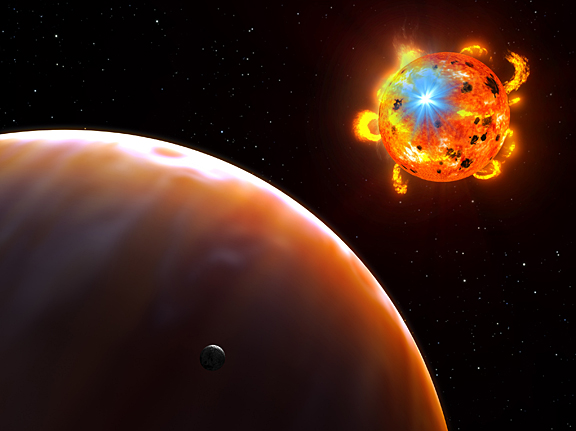 A deep survey of more than 200,000 stars in our Milky Way galaxy has unveiled the sometimes petulant behavior of tiny red dwarf stars. These stars, which are smaller than the Sun, can unleash powerful eruptions called flares that may release the energy of more than 100 million atomic bombs.

Red dwarfs are the most abundant stars in our universe and are presumably hosts to numerous planets. However, their erratic behavior could make life unpleasant, if not impossible, for many alien worlds. Flares are sudden eruptions of heated plasma that occur when powerful magnetic field lines in a star’s atmosphere “reconnect,” snapping like a rubber band and releasing vast amounts of energy. When they occur, flares would blast any planets orbiting the star with ultraviolet light, bursts of X-rays, and a gush of charged particles called a stellar wind.

“We know that hyperactive young stars produce flares, but this study shows that even in fairly old stars that are several billion years old, flares are a fact of life,” says astronomer Rachel Osten of the Space Telescope Science Institute in Baltimore, Md., leader of the research team. “Life could be rough for any planets orbiting close enough to these flaring stars. Their heated atmospheres could puff up and might get stripped away.”

Osten and her team, including Adam Kowalski of the University of Washington in Seattle, found that the red dwarf stars flared about 15 times less frequently than in previous surveys, which observed younger and less massive stars.

The stars in this study were originally part of a search for planets. Hubble monitored the stars continuously for a week in 2006, looking for the signature of planets passing in front of them. The stars were photographed by Hubble’s Advanced Camera for Surveys during the extrasolar-planet survey called the Sagittarius Window Eclipsing Extrasolar Planet Search (SWEEPS).

Osten and Kowalski realized that this powerful census contained important information on the stars themselves, and they took advantage of it. They searched the Hubble data, looking for a slight increase in the brightness of red dwarfs, a signature of flares. Some of the stars grew up to 10 percent brighter over a short period of time, which is actually much brighter than flares on our Sun. The average duration of the flares was 15 minutes. A few stars produced multiple flares.

The astronomers found that stars that periodically oscillate in brightness, called variable stars, were more prone to the short-term outbursts.

“We discovered that variable stars are about a thousand times more likely to flare than non-variable stars,” Kowalski says. “The variable stars are rotating fast, which may mean they are in rapidly orbiting binary systems. If the stars possess large star spots, dark regions on a star’s surface, that will cause the star’s light to vary when the spots rotate in and out of view. Star spots are produced when magnetic field lines poke through the surface. So, if there are big spots, there is a large area covered by strong magnetic fields, and we found that those stars had more flares.”

Although red dwarfs are smaller than the Sun, they have a deeper convection zone, where cells of hot gas bubble to the surface, like boiling oatmeal,” Osten explains. This zone generates the magnetic field and enables red dwarfs to put out such energetic flares.

“The red dwarfs also have magnetic fields that are stronger than the Sun’s,” Osten continues. “They cover a much larger area than the Sun. Sunspots cover less than 1 percent of the Sun’s surface, while red dwarfs can have star spots that cover half of their surfaces.”

Kowalski will present the team’s results on Jan. 12, 2011, at the American Astronomical Society meeting in Seattle, Wash.