“I am astounded and thrilled by the discoveries of the Mars Exploration Rovers Program and I’m so proud of upstate New York’s connection to this historic endeavor.  Cornell’s Dr. Stephen Squyres and his team at the Jet Propulsion Lab have found what they have been searching for – evidence of water on Mars.  And after meeting with Dr. Squyres today, I have an even greater appreciation for the magnitude of this discovery.

“The Mars Rovers set out to determine whether parts of Mars had a watery history that could have been hospitable to life, and Opportunity’s discovery provides compelling evidence in support of that possibility.

“The Rovers have taken us on an amazing ride, that has really only just begun.  I watched with awe as Spirit landed successfully on the surface of Mars and began sending back incredible pictures and data to Earth.  I waited anxiously as we lost contact with Spirit in late January.  I breathed a sigh of relief when Dr. Squyres and his team fixed Spirit’s software problem and got her roving once again.  I applauded a second time when Opportunity landed, and began its journey, halfway around the planet from Spirit.  And today’s exciting announcement adds to my wonderment, throughout this amazing mission.

“The ‘icing on the cake’ was Dr. Squyres visit to my Washington office today.  I was grateful for the opportunity to congratulate him, the team at the Jet Propulsion Lab, and the incredible folks at NASA on their many successes.  We discussed the importance of sharing his Mars discoveries with students across the country, with the hope of inspiring the next generation of scientists and explorers.  We also discussed the President’s proposed space exploration initiative, and I’m grateful for his expert counsel as we work to determine the future direction of the nation’s space program.” 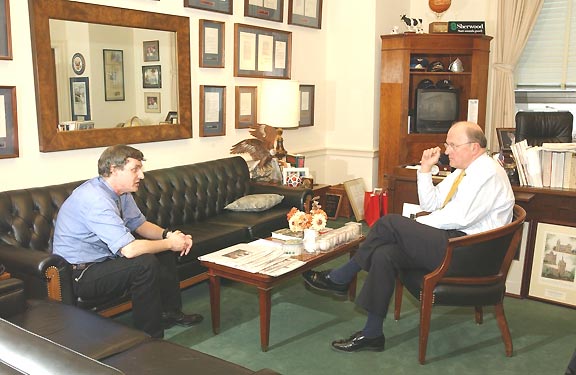