By SpaceRef Editor
September 22, 2003
Filed under NASA HQ, US 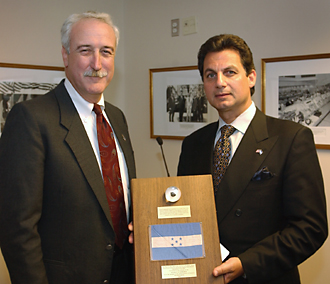 NASA Administrator Sean O’Keefe (left) formally returned a plaque containing a Moon rock to Honduran Ambassador Mario M. Canahuati (right). Presented by President Richard Nixon in 1973 to the Honduran people, the Moon rock mysteriously disappeared from the Presidential Palace between 1990 and 1994.
The plaque was recovered in a sting operation coordinated by NASA’s Office of Inspector General. Several Federal agencies, now part of the Office of Homeland Security, participated in the operation.