Much like quiet, middle-aged baby boomers peacefully residing in some of the world’s largest cities, families of some galaxies also have a hidden wild youth that they only now are revealing for the first time, according to research by astronomers at Texas A&M University.

In ongoing observations of one of the Universe’s earliest, most distant cluster of galaxies using NASA’s Spitzer Space Telescope, an international team of researchers led by Texas A&M’s Dr. Kim-Vy Tran has discovered that a significant fraction of those ancient galaxies are still actively forming stars.

Tran, an assistant professor in the Texas A&M Department of Physics and Astronomy and member of the George P. and Cynthia Woods Mitchell Institute for Fundamental Physics and Astronomy, and her team have spent the past 4 months analyzing images taken from the Multiband Imaging Photometer for Spitzer (MIPS), essentially looking back in time nearly 10 billion years at a high-redshift cluster known as CLG J02182-05102. Mere months after first discovering the cluster and the fact that it is shockingly “modern” in its appearance and size despite being observed just 4 billion years after the Big Bang, the Texas A&M-led team was able to determine that the galaxy cluster produces hundreds to thousands of new stars every year — a far higher birthrate than what is present in nearby galaxies.

What is particularly striking, according to Tran, is the fact that the stellar birthrate is higher in the cluster’s center than at the cluster’s edges — the exact opposite of what happens in our local portion of the Universe, where the cores of galaxy clusters are known to be galactic graveyards full of massive elliptical galaxies composed of old stars.

“A well-established hallmark of galaxy evolution in action is how the fraction of star-forming galaxies decreases with increasing galaxy density,” explains Tran, lead author of the team’s study which appears in The Astrophysical Journal Letters. “In other words, there are more star-forming galaxies in the field than in the crowded cores of galaxy clusters. However, in our cluster, we find many galaxies with star-formation rates comparable to their cousins in the lower-density field environment.”

Exactly why this star power increases as galaxies become more crowded remains a mystery. Tran thinks the densely-populated surroundings could lead to galaxies triggering activity in one another, or that all galaxies were extremely active when the Universe was young. 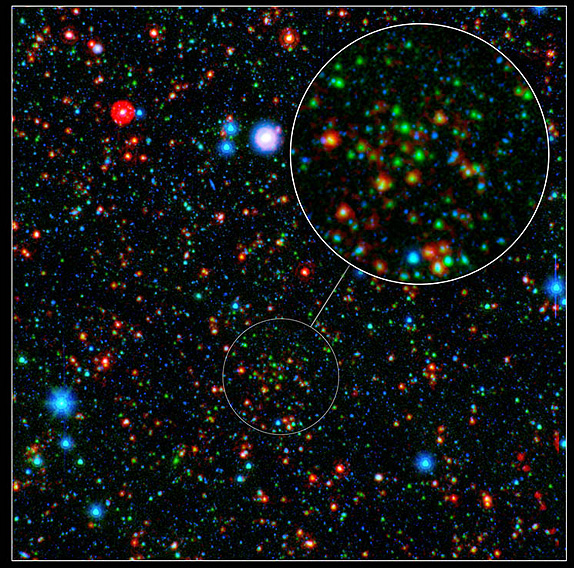 The group’s discovery holds potentially compelling implications that could ultimately reveal more about how such massive galaxies form. Observations of nearby galaxy clusters confirm that they are made of stars that are at least 8 to 10 billion years old, which means that CLG J02182-05102 is nearing the end of its hyperactive star-building period.

Now that they have pinpointed the epoch when galaxy clusters are making the last of their stars, astronomers can focus on understanding why massive assemblies of galaxies transition from very active to passive. Identifying how long it takes for galaxies in clusters to build up their stellar mass as well as the time at which they stop provides strong constraints for how these massive galaxies form.

“Our study shows that by looking farther into the distant Universe, we have revealed the missing link between the active galaxies and the quiescent behemoths that live in the local Universe,” Tran adds. “Our discovery indicates that future studies of galaxy clusters in this red-shift range should be particularly fruitful for understanding how these massive galaxies form as a function of their environment.”

Tran’s team includes fellow Texas A&M astronomer Dr. Casey Papovich, who first identified the galaxy cluster CLG J02182-05102 in May. The collection of roughly 60 galaxies is observed just 4 billion years after the Big Bang, making it the earliest cluster of galaxies ever detected. However, the team was struck not by its age, but by its astoundingly modern appearance — a huge, red collection of galaxies typical in only local clusters.

The fact that Tran’s team was able to see these active galaxies so far back in time (Tran likens their find to discovering that her mild-mannered grandparent had lived a fast and furious youth) is only the preface to what they expect eventually to learn about these clusters. Tran will continue to lead an international collaboration with Papovich and their postdoctoral researchers to examine these clusters more thoroughly and hopefully to understand why they are still so energetic.

“We will analyze new observations scheduled to be taken with the Hubble Space Telescope and Herschel Space Telescope to study these galaxies more carefully to understand why they are so active,” Tran adds. “We will also start looking at several more distant galaxy clusters to see if we find similar behavior.”

The team’s findings are detailed in their paper, “Reversal of Fortune: Confirmation of an Increasing Star Formation-Density Relation in a Cluster at z=1.62,” available online: http://iopscience.iop.org/2041-8205/719/2/L126/