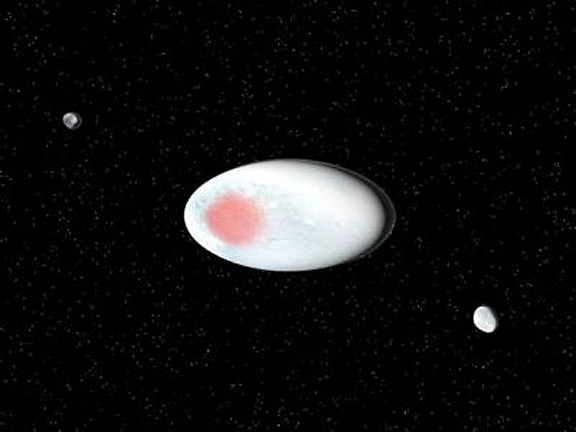 The fifth dwarf planet of the Solar System, Haumea, and at least one of its two satellites, are covered in crystalline water-ice due to the tidal forces between them and the heat of radiogenic elements. This is the finding of an international research study using observations from the VLT telescope at the European Southern Observatory in Chile.

The tiny and strange planet Haumea moves beyond the orbit of Neptune. It has the shape of a flattened rugby ball and is around 2,000 km long. It spins completely in less than four hours, at one of the fastest rotation speeds in the Solar System. The crystallised water that covers this planet and its two satellites (Hi’iaka and Namaka) makes them shine in the darkness of space.

Now an international research team has confirmed that 75% of Haumea and 100% of Hi’iaka (which is around 400 km in diameter) are covered with crystallised water-ice (with an ordered structure) and not, as would have been expected, with amorphous ice disorganised due to solar radiation. The study suggests that the planet is made up of a frozen outer layer and an internal section made up of between 88% and 97% rock (with a density of 3.5 g/cm3).

“Since solar radiation constantly destroys the crystalline structure of ice on the surface, energy sources are required to keep it organised. The two that we have taken into consideration are that able to generate radiogenic elements (potassium-40, thorium-232 and uranium-238) from the inside, and the tidal forces between Haumea and its satellites (as seen between the Earth and the Moon)”, Benoit Carry, co-author of the study and a researcher at the ESAC Centre of the European Space Agency (ESA) in Madrid (Spain), tells SINC.

The researcher also highlights other peculiarities of Haumea: “Its orbital plane is inclined at 28o with respect to the usual plane of planets in the Solar System, the orbits of its satellites are not on the same plane either – which is very unusual – and the entire system belongs to a single family within the frozen objects in the Kuiper Belt (at a distance of between 4.5 billion and more than 15 billion kilometres from the Sun)”.

According to the scientists, the two satellites could have been created by another object smashing into Haumea, which could also have originated the rapid rotation of the dwarf planet (3.9 hours) and have moulded it into its rugby ball shape. Some numerical models have demonstrated that this could be caused by a fairly tangential impact.

Observations from the SINFONI instrument of the Very Large Telescope (VLT), the enormous telescope of the European Southern Observatory (ESO) in Chile, were used in order to carry out the study, which has been published in the journal Astronomy & Astrophysics. ESO astronomer Christophe Dumas led this study from the observatory.

“SINFONI is an integral field spectrometer that provides ‘data cubes’ in which two of the dimensions are spatial (like those of any flat image), while the third is spectral, meaning that each layer of the cube is an image taken with a different wave size”, explains Carry.

The mystery and polemic of Haumea

The scientist acknowledges that the precise orbits and sizes of the dwarf planet are still not known (they are operating with approximate scales of around 2,000 x 1,500 x 1,000 km) nor are those of its satellites. In reality, these are two very distant bright points of light, the data for which are obtained indirectly.

In the case of the tiny Namaka (around 200 km in diameter), the signal at the time it was observed was so weak that it was impossible to obtain information about its surface, although new data on its orbit were gathered. Meanwhile, the models for the tidal forces of this strange system are also improving.

Another of the mysteries of Haumea is the presence of a dark, reddish spot, which contrasts with the whitish colour of the planet. “My interpretation of the infrared photometry is that this area could be a richer source of crystalline water-ice than the rest of the surface”, Pedro Lacerda, co-discoverer of the spot and an astronomer at Queen’s University in Belfast (United Kingdom), tells SINC. The researcher does not rule out the possibility of some kind of irradiated mineral or organic matter having caused this colouration.

Haumea is the fifth dwarf planet in the Solar System along with Pluto, Ceres, Eris and Makemake. Its existence was confirmed in 2005, when it was called 2003 EL61 (from the international nomenclature code: year of first observation, half and order number).

Two teams of astronomers contested the discovery. The first group was led by the Spanish researcher Jose Luis Ortiz Moreno from the Institute of Astrophysics of Andalusia (CSIC), while the other was led by the astrophysicist Michael E. Brown from the California Institute of Technology (Caltech, USA).

In the end, the International Astronomical Union decided to accept the discovery by the Spanish team, but named the strange dwarf planet and its satellites according to names suggested by the American team. In Hawaiian mythology, Haumea is the goddess of fertility and birth, and Hi’iaka and Namaka are two of her daughters.