Groundwater-fed Martian Lake Could Contain Clues to a Subsurface Biosphere 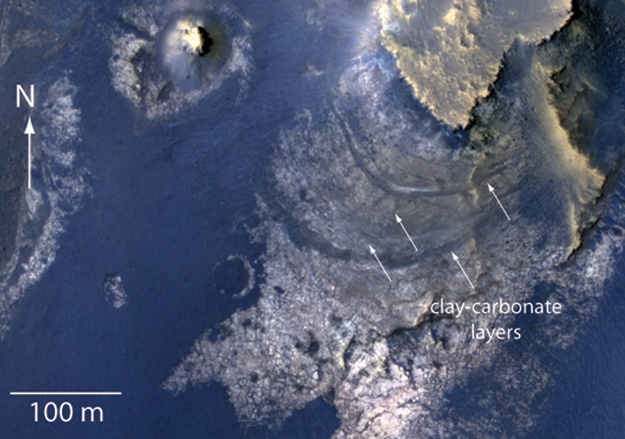 Jan. 20, 2013, Tucson, Ariz. — The subsurface environment on Mars may hold clues to the origin of life, scientists argue in a recently published research article led by Planetary Science Institute’s Joseph Michalski. A large fraction of the life on Earth may exist as microbes deep underground on our home planet. The same could have been true in the past on Mars.

“Recent results produced by several authors using data from the Compact Reconnaissance Imaging Spectrometer for Mars instrument aboard NASA’s Mars Reconnaissance Orbiter have shown that the subsurface of Mars was widely altered by subsurface water” Michalski said. “Here, we argue that all of the ingredients for life existed in the subsurface, and it may have been the most habitable part of Mars.”

In some cases, those deep fluids, which could have harbored life, have emerged from the subsurface in deep basins, he said.

Michalski found that McLaughlin Crater, one of the deepest craters on Mars, contains evidence of clays and carbonates that probably formed in an alkaline, groundwater-fed lake.

McLaughlin Crater has a diameter of 57 miles and a depth of 1.4 miles.

“Taken together, the observations in McLaughlin Crater provide the best evidence for carbonate forming within a lake environment instead of being washed into a crater from outside. It would have been an alkaline lake, a habitable environment for microbial life,” said PSI Research Scientist Michalski, lead author of the recently published Nature Geosciences paper “Groundwater Activity on Mars and implications for a deep biosphere.”

“The most interesting aspect of Mars science, perhaps, is that the planet might provide a window into our own past. The environmental conditions on Earth and Mars were likely similar early on, at least in the subsurface,” Michalski said. “Exploring those rocks on Mars would be like finding a stack of pages that have been ripped out of Earth’s geologic history book. Whether they contain life or not, they would certainly teach us a tremendous amount about early chemical processes in the solar system.”

This research was funded by a grant to PSI from NASA’s Mars Data Analysis Program.

Images may be found at http://www.psi.edu/news/press-releases/michalski_012013