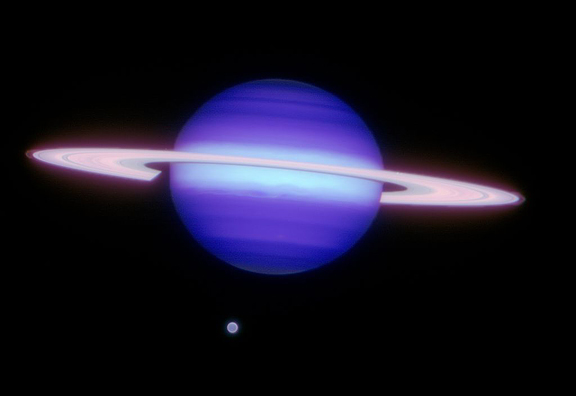 Gemini North infrared image of Saturn and Titan (at about 6 o’clock position). Image obtained on May 7, 2009 (5:31 UTC), using the Altair adaptive optics system with the Near-infrared imager (NIRI). Color composite image made using data from three infrared filters (K’ [2.0-2.1 microns], h210 [2.12 mircon narrowband], and bracket gamma [2.17 micron narrowband]), field of view is about 40 arcseconds across. Note to photo editors: The full-resolution images are at the native pixel dimensions of the data and are not available at higher resolution without resampling. At the edges of Saturn’s ring, the F-ring is faintly visible. The F-ring was discovered in images from the Pioneer 11 spacecraft in 1979 and is normally not apparent in images taken with ground-based telescopes. Also apparent are several of Saturn’s smaller moons. Credit: Gemini Observatory/AURA/Henry Roe, Lowell Observatory/Emily Schaller, Insitute for Astronomy, University of Hawai’i

Taking advantage of advanced techniques to correct distortions caused by Earth’s atmosphere, astronomers used the NSF-supported Gemini Observatory to capture the first images of clouds over the tropics of Titan, Saturn’s largest moon.

The images clarify a long-standing mystery linking Titan’s weather and surface features, helping astronomers better understand the moon of Saturn, viewed by some scientists as an analog to Earth when our planet was young.

The effort also served as the latest demonstration of adaptive optics, which use deformable mirrors to enable NSF’s suite of ground-based telescopes to capture images that in some cases exceed the resolution of images captured by space-based counterparts.

Emily Schaller from the University of Hawai’i, Henry Roe from Lowell Observatory, and Tapio Schneider and Mike Brown, both of Caltech, reported their findings in the Aug. 13, 2009, issue of Nature.

“Adaptive optics are helping our ground-based telescopes accomplish feats that have until now been capable only with telescopes in space,” said Brian 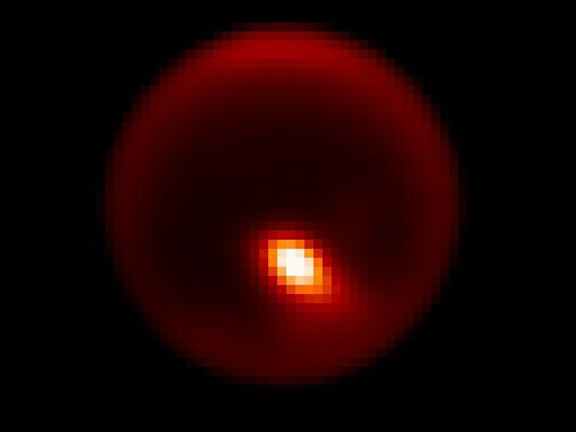 Gemini North adaptive optics image of Titan showing storm feature (bright area). Titan is about 0.8 arcsecond across in this 2.12 micron near-infrared image obtained on April 14, 2008 (UTC). Note to photo editors: This image is provided at full pixel resolution and is not available at higher resolution due to the nature of this data. Credit: Gemini Observatory/AURA/Henry Roe, Lowell Observatory/Emily Schaller, Insitute for Astronomy, University of Hawai’i

Patten, a program director in NSF’s Astronomy Division. “Now, we can remove the affects of the atmosphere, capturing images that in some cases exceed the resolution of those captured by space-based telescopes. Investments in adaptive optics technology are really starting to pay off.”

On Titan, clouds of light hydrocarbons, not water, occasionally emerge in the frigid, dense atmosphere, mainly clustering near the poles, where they feed scattered methane lakes below.

Closer to the moon’s equator, clouds are rare, and the surface is more similar to an arid, wind-swept terrain on Earth. Observations by space probes suggest evidence for liquid-carved terrain in the tropics, but the cause has been a mystery.

Regular monitoring of Titan’s infrared spectrum suggests clouds increased dramatically in 1995 and 2004, inspiring astronomers to watch closely for the next brightening, an indicator of storms that could be imaged from Earth.

Schaller and her colleagues used NASA’s Infrared Telescope Facility (IRTF), situated on Hawaii’s Mauna Kea, to monitor Titan on 138 nights over a period of two years, and on April 13, 2008, the team saw a tell-tale brightening.

The researchers then turned to the NSF-supported Gemini North telescope, an 8-meter telescope also located on Mauna Kea, to capture the extremely high-resolution infrared snapshots of Titan’s cloud cover, including the first storms ever observed in the moon’s tropics.

The team suggests that the storms may yield precipitation capable of feeding the apparently liquid-carved channels on the planet’s surface, and also influenced weather patterns throughout the moon’s atmosphere for several weeks.