Greenhouse for a Red Planet?

MOUNTAIN VIEW, CA — SpaceRef Interactive Inc. today
announced the donation of an experimental greenhouse to the
SETI Institute’s Center for the Study of Life in the
Universe. The donation supports research activities on
Devon Island, Nunavut, in the Canadian high Arctic,
conducted under the auspices of the NASA Haughton-Mars
Project.


Named after and dedicated to Sir Arthur C. Clarke,
originator of communications satellites, author of 2001: A
SPACE ODYSSEY and almost 100 other books, the “Arthur Clarke
Mars Greenhouse” will support research activities that
increase our understanding of life in the universe and help
pave the way for the human exploration of Mars. “Look out,
Mars – here we come!” said Clarke, about the greenhouse.


The NASA Haughton-Mars Project (HMP) is an international,
interdisciplinary planetary-analog field research project
led by Dr. Pascal Lee, planetary scientist, of the SETI
Institute. Pending acquisition of all necessary resources,
the Arthur Clarke Mars Greenhouse will be deployed and
equipped in two stages, the first in Summer 2002, the second
in Summer 2003. The 2002 field season will be dedicated to
installation and monitoring of the environmental
characteristics of the greenhouse. Research operations
involving selected plant growth would begin in 2003. 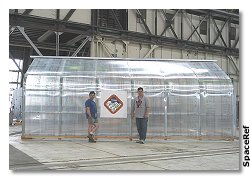 The assembled greenhouse is 24 feet long, 12 feet wide, and
has a maximum height of 10 feet along its center spine. The
greenhouse will undergo test assembly at NASA Ames Research
Center in Moffett Field, CA, and is displayed at the Second
Astrobiology Science Conference 7-11 April, 2002.
Installation on Devon Island is expected to occur in July,
2002 at the earliest.


The Arthur Clarke Mars Greenhouse is being donated by
SpaceRef to the SETI Institute so as to allow the growth and
harvesting of selected plants in support of basic and
applied research in the fields of astrobiology, space
biology, life support systems studies, information
technologies, and human factors relating to the human
exploration of Mars.


“It is one thing to talk about doing complex technical
operations in a remote, potentially hazardous location. It
is another thing altogether to actually go there and try to
make it work” said Marc Boucher, SpaceRef CEO and HMP-2000
field season veteran.


The Arthur Clarke Mars Greenhouse initiates an experimental
testbed that supports field research with the goal of
understanding the operational challenges faced by future
astronauts on the surface of Mars. “We hope that our
contribution will lead – indeed stimulate – the deployment
of high fidelity simulations of potential Mars greenhouses
in the years to come” said SpaceRef President Keith Cowing.


Ultimately, this greenhouse, and the scientific research
that is conducted within, is intended to further the
prospect of sending humans to Mars.


“The Arthur Clarke Mars Greenhouse will help us plan the
human exploration of Mars and teach us more about the
possibilities and requirements of life in extreme
environments on Earth, Mars and beyond” said Lee.


Further information about the greenhouse is available at http://research.spaceref.com.

About SETI Institute, HMP and SpaceRef:


The NASA HMP Principal Investigator is Dr. Pascal Lee, a
planetary scientist with the Center for the Study of Life in
the Universe at the SETI Institute. Lee is based at NASA
Ames Research Center. SpaceRef’s Greenhouse Project Manager
is Keith Cowing, President of SpaceRef Interactive, Inc.,
and former NASA space biologist and payload integration
manager. Once deployed, research in the greenhouse will be
overseen by a science team under the auspices of the NASA
HMP.


SpaceRef Interactive Inc. (http://www.spaceref.com) is an
international Internet content and database firm
specializing in scientific and technical websites with
offices in Reston, Virginia USA, and Victoria, British
Columbia, Canada. Among SpaceRef’s products are
SpaceRef.com, SpaceRef.ca, and Astrobiology.com which
provide a daily collection of news stories, press releases
and status reports housed in the world’s largest online
searchable database of space news items; a directory of
space-related websites; and a series of dedicated search
engines for both broad and specialized areas of space
research and exploration. SpaceRef also believes in giving
something back to the audience and community that utilize
its resources and has made a practice since its founding in
1999 of providing monetary, hardware, and personnel support
to research efforts such as the Haughton-Mars Project.
Further information about the greenhouse is available at
http://research.spaceref.com.


About the NASA Haughton-Mars Project


The NASA Haughton-Mars Project (HMP)
(http://www.marsonearth.org) is an international
interdisciplinary field research project centered on the
scientific study of the Haughton impact crater and
surrounding terrains, Devon Island, Nunavut, Canadian high
Arctic, viewed as a possible Mars analog. The rocky polar
desert setting, geologic features and biological attributes
of the site offer unique insights into the evolution of
Mars, the effects of impacts on Earth and other planets, and
the possibilities of life in extreme environments.
Scientific field studies at Haughton also support
exploration research, allowing for investigations of the
technologies, strategies, humans factors and hardware
designs relevant to the future exploration of Mars and other
planetary bodies by robots and humans. HMP-2002 will be the
6th field season of the HMP. The HMP is managed by the SETI
Institute at the Institute’s Center for the Study of Life in
the Universe.


About the SETI Institute


The SETI Institute (http://www.seti.org) was incorporated as
a 501 (c) (3) non-profit California corporation on November
20, 1984. The purpose of the Institute, as defined at that
time and still true today, is to conduct scientific research
and educational projects relevant to the origin, nature,
prevalence, and distribution of life in the universe. This
work includes two primary research areas: 1) the scientific
Search for Extraterrestrial Intelligence (SETI), and 2) Life
in the Universe research. Concurrent with its research
focus, the Institute strives to contribute to both formal
and informal science education related to these fields of
interest. Over its seventeen year history, the Institute has
administered over $150 million of funded research.