By SpaceRef Editor
March 13, 2012
Filed under Commerce, General Motors, US

General Motors and NASA are jointly developing a robotic glove that auto workers and astronauts can wear to help do their respective jobs better while potentially reducing the risk of repetitive stress injuries.

The Human Grasp Assist device, known internally in both organizations as the K-glove or Robo-Glove, resulted from GM and NASA’s Robonaut 2 (R2) project, which launched the first human-like robot into space in 2011. R2 is a permanent resident of the International Space Station.

When engineers, researchers and scientists from GM and NASA began collaborating on R2 in 2007, one of the design requirements was for the robot to operate tools designed for humans, alongside astronauts in outer space and factory workers on Earth. The team achieved an unprecedented level of hand dexterity on R2 by using leading-edge sensors, actuators and tendons comparable to the nerves, muscles and tendons in a human hand.

Research shows that continuously gripping a tool can cause fatigue in hand muscles within a few minutes. Initial testing of the Robo-Glove indicates the wearer can hold a grip longer and more comfortably.

“When fully developed, the Robo-Glove has the potential to reduce the amount of force that an auto worker would need to exert when operating a tool for an extended time or with repetitive motions,” said Dana Komin, GM’s manufacturing engineering director, Global Automation Strategy and Execution. “In so doing, it is expected to reduce the risk of repetitive stress injury.”

Inspired by the finger actuation system of R2, actuators are embedded into the upper portion of the glove to provide grasping support to human fingers. The pressure sensors, similar to the sensors that give R2 its sense of touch are incorporated into the fingertips of the glove to detect when the user is grasping a tool. When the user grasps the tool, the synthetic tendons automatically retract, pulling the fingers into a gripping position and holding them there until the sensor is released. GM and NASA have submitted 46 patent applications for R2, including 21 for R2’s hand and four for the Robo-Glove alone.

The first prototype of the glove was completed in March 2011 with a second generation arriving three months later. The fabric for the glove was produced by Oceaneering Space Systems, the same company that provided R2’s “skin.”

The current prototypes weigh about two pounds and include the control electronics, actuators and a small display for programming and diagnostics. An off-the-shelf lithium-ion power-tool battery with a belt-clip is used to power the system. A third-generation prototype that will use repackaged components to reduce the size and weight of the system is nearing completion.

“We are continuously looking for ways to improve safety and productivity on the shop floor,” Komin said. “Our goal is to bring this technology to the shop floor in the near future.” 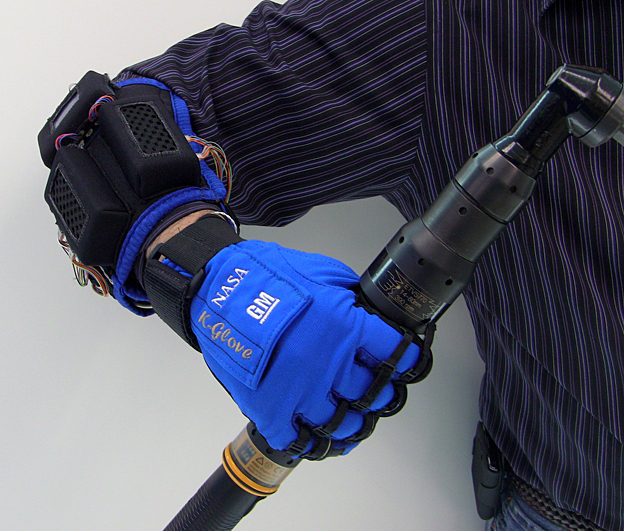 The Human Grasp Assist, based on the robotic hand of General Motors’ and NASA’s Robonaut 2, is designed to allow the wearer to hold a grip longer and more comfortably. The glove, still in prototype stage, is expected to be used in space and applied to manufacturing plant use on Earth. 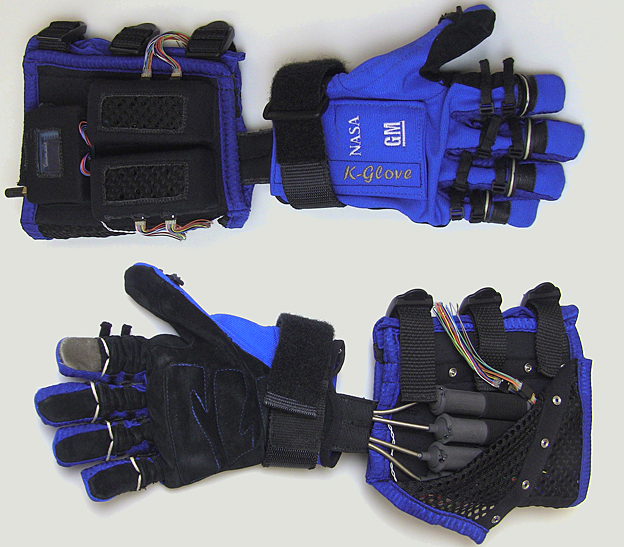 The Human Grasp Assist, based on the robotic hand of GM and NASA’s Robonaut 2, uses leading-edge sensors, actuators and tendons comparable to the nerves, muscles and tendons in a human hand. The glove, still in prototype stage, is expected to be used in space and applied to manufacturing plant use on Earth.

General Motors Co. (NYSE:GM, TSX: GMM) and its partners produce vehicles in 30 countries, and the company has leadership positions in the world’s largest and fastest-growing automotive markets. GM’s brands include Chevrolet and Cadillac, as well as Baojun, Buick, GMC, Holden, Isuzu, Jiefang, Opel, Vauxhall and Wuling. More information on the company and its subsidiaries, including OnStar, a global leader in vehicle safety, security and information services, can be found at http://www.gm.com. About NASA Johnson Space Center

The National Aeronautics and Space Administration (NASA) is the agency of the United States government that is responsible for the nation’s civilian space program and for aeronautics and aerospace research. Since February 2006, NASA’s mission statement has been to “pioneer the future in space exploration, scientific discovery and aeronautics research.” The Lyndon B. Johnson Space Center is the NASA’s center for human spaceflight training, research and flight control in Houston, Texas, USA. Johnson Space Center is home to the United States astronaut corps and is responsible for training astronauts from both the U.S. and its international partners.