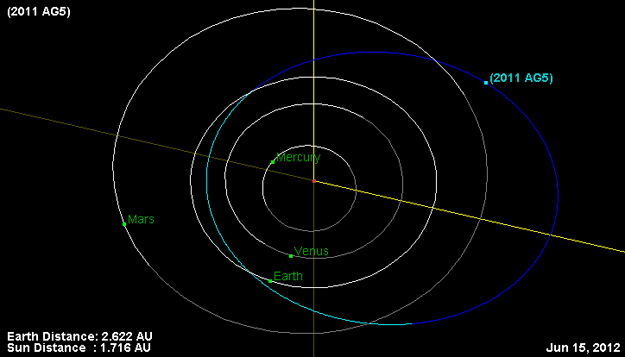 ESA, NASA and international researchers met last week to assess the latest data on asteroid 2011 AG5, discovered in January 2011. The workshop consensus finding is that the object will most likely fly safely past Earth in 2040.

Current findings and analysis data from scientists and engineers worldwide were reported at a 29 May workshop at NASA’s Goddard Space Flight Center. Discussions focused on observations of ‘potentially hazardous asteroids’ – those whose orbits take them near Earth.

Observations to date indicate there is a slight chance that AG5 could impact Earth in 2040. Attendees expressed confidence that in the next four years analysis of space and ground-based observations will show the likelihood of 2011 AG5 missing Earth to be virtually certain.

Some 140 m across, the space rock was discovered by the Catalina Sky Survey operated by the University of Arizona in Tucson, USA. Several observatories monitored 2011 AG5 for nine months before it moved too far away and grew too faint to see.

“While the workshop shows that 2011 AG5 is nothing to worry about, Europe is keeping track of the asteroid,” says Detlef Koschny, Head of the Near-Earth Object team at ESA’s Space Situational Awareness office.

“The German-led NEOShield project in particular has been performing studies on how to best deflect this asteroid were it to come close to Earth.

“ESA is building up the capability of ensuring that these objects are tracked within its Space Situational Awareness programme.”

Several years ago another asteroid, Apophis, was thought to pose a similar impact threat in 2036. Additional observations taken from 2005 through 2008 enabled scientists to refine their understanding of the asteroid’s path, which showed a significantly reduced likelihood of a hazardous encounter. Observations of 2011 AG5 have been limited to date because of its present location beyond the orbit of Mars and in the daytime sky on the other side of the Sun.

In autumn 2013, conditions will improve to allow space- and ground-based telescopes to track the asteroid’s path better. At that time, 2011 AG5 will be 147 million kilometres from Earth but favourably located for observations in the late evening sky. “After more observations in 2013, experts expect to be able to reduce the impact risk to zero,” says Detlef.

Although scientists widely expect it to be a safe flyby, they acknowledge the slight chance that computed odds could rise as a result of observations to be taken from 2013 to 2016. According to the experts at the workshop, even if the odds do increase, there is still ample time to plan and carry out at least one of several viable missions to change the asteroid’s course.