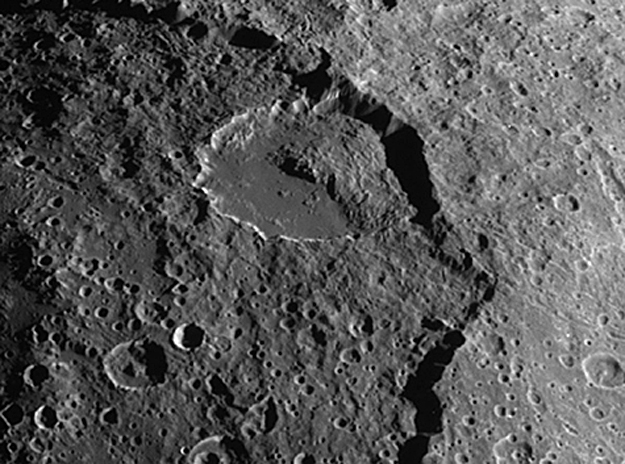 IMAGE: When the rimwall of Iapetus’s Malun crater broke off and plunged more than five miles to the crater floor.

“We see landslides everywhere in the solar system,” says Kelsi Singer, graduate student in earth and planetary sciences in Arts & Sciences at Washington University in St. Louis, “but Saturn’s icy moon Iapetus has more giant landslides than any body other than Mars.”

The reason, says William McKinnon, PhD, professor of earth and planetary sciences, is Iapetus’ spectacular topography. “Not only is the moon out-of-round, but the giant impact basins are very deep, and there’s this great mountain ridge that’s 20 kilometers (12 miles) high, far higher than Mount Everest.

“So there’s a lot of topography and it’s just sitting around, and then, from time to time, it gives way,” McKinnon says.

Falling from such heights, the ice reaches high speeds — and then something odd happens.

Somehow, its coefficient of friction drops, and it begins to flow rather than tumble, traveling many miles before it dissipates the energy of the fall and finally comes to rest.

In the July 29 issue of Nature Geoscience, Singer, McKinnon and colleagues Paul M. Schenk of the Lunar and Planetary Institute and Jeffrey M. Moore of the NASA Ames Research Center, describe these giant ice avalanches.

They challenge experimental physicists to measure friction when ice is sliding, and suggest a mechanism that might make ice or rocks slippery, not just during avalanches or landslides, but also during earthquakes or icy moonquakes.

The ice avalanches on Iapetus aren’t just large; they’re larger than they should be given the forces scientists think set them in motion and bring them to a halt.

The counterpart to the Iapetian ice avalanche on Earth is a long-runout rock landslide, or sturzstrom (German for “fallstream”). Most landslides travel a horizontal distance that is less than twice the distance the rocks have fallen.

On rare occasions, however, a landslide will travel 20 or 30 times farther than it fell, traveling for long distances horizontally or even surging uphill. These extraordinarily mobile landslides, which seem to spill like a fluid rather than tumble like rocks, have long mystified scientists.

The mechanics of a normal runout are straightforward. The debris travels outward until friction within the debris mass and with the ground dissipates the energy the rock gained by falling, and the rock mass comes to rest.

But to explain the exceptionally long runouts, some other mechanism must be invoked as well. Something must be acting to reduce friction during the runout, Singer says.

The trouble is, there is no agreement about what this something might be. Proposals have included a cushion of air, lubrication by water or by rock flour or a thin melted layer. “There are more mechanisms proposed for fiction reduction than I can put on a PowerPoint slide,” McKinnon jokes.

“The landslides on Iapetus are a planet-scale experiment that we cannot do in a laboratory or observe on Earth,” Singer says. “They give us examples of giant landslides in ice, instead of rock, with a different gravity, and no atmosphere. So any theory of long runout landslides on Earth must also work for avalanches on Iapetus.”

An experiment by accident

McKinnon, whose research focuses on the icy satellites of the outer solar system planets, has been studying Iapetus since the Cassini spacecraft flew by it in December 2004 and September 2007 and streamed images of the ice moon to Earth.

Almost everything about Iapetus is odd. It should be spherical, but it’s fatter at the equator than at the poles, probably because it froze in place when it was spinning faster than it is now. And it has an extremely tall, razor-striaght mountain range of mysterious origin that wraps most of the way around its equator. Because of its stoutness and giant ridge, the moon looks like an oversized walnut.

IMAGE: Ice avalanches on Rhea behave differently than those on Iapetus. On Rhea, ice lands in a debris pile beneath the crater wall instead of scooting miles into the crater.

If the Iapetian surface locked in place before it could spin down to a sphere, there must be stresses in its surface, McKinnon reasoned. So he suggested Singer check the Cassini images for stress fractures in the ice.

She looked carefully at every Cassini image and didn’t find much evidence of fracturing. Instead, she kept finding giant avalanches.

Singer eventually identified 30 massive ice avalanches in the Cassini images — 17 that had plunged down crater walls and another 13 that had swept down the slides of the equatorial mountain range.

Careful measurements of the heights from which the ice had fallen and the avalanche runout did not find trends consistent with some of the most popular theories for the extraordinary mobility of long-runout landslides.

The scientists say data can’t exclude them, however. “We don’t have the same range of measurements for the Iapetian avalanches that is available for landslides on Earth and Mars,” Singer explains. 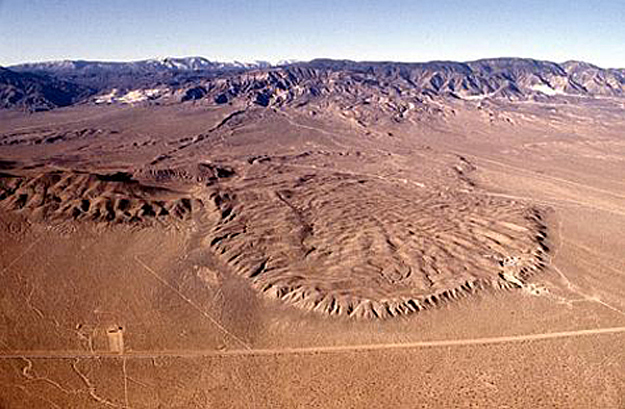 Coefficients of friction can range from near zero to greater than one. Laboratory measurements of the coefficients for really cold ice lie between 0.55 and 0.7.

The coefficients for the Iapetus avalanches, however, scatter between 0.1 and 0.3. Something is off here.

In a typical laboratory experiment to measure the frictional coefficient of ice, cylinders of ice are rotated against one another and their resistance to rotation is measured. If ice is moving slowly, it is very frictional.

But if it were moving faster, the friction might be lower.

Would rapid motion make even super-cold ice slippery? That’s a testable hypothesis, the scientists point out, and one they hope experimental physicists soon will take for a spin.

If ice becomes less frictional when traveling at speed, what about rock? “If you had some kind of quick movement, whether it was a landslide or the slip along a fault, the same kind of thing could happen,” Singer says.

Geologists now realize that major faults are weaker during earthquakes than laboratory measurements of rocks’ coefficients of friction suggest they should be, she says.

Nobody is sure what lubricates the faults when they are jolted into motion by an earthquake, but one of the simplest hypotheses is something called flash heating, Singer says. The idea is that as the rocks slide past one another, asperities (tiny contact points) on their surfaces are heated by friction.

Above a critical speed, the heat would not have time to escape the contact points, which would be flash-heated to temperatures high enough to weaken or even melt the rock. This weakening might explain high slip rates and large sliding displacements characteristic of earthquakes.

The case for flash heating is buttressed by the discovery of rocks that seem to have undergone frictional melting, generically called frictionites, or pseudotachylites, along faults and associated with some rock slides, Singer says.

“You might think friction is trivial,” McKinnon says, “but it’s not. And that goes for friction between ices and friction between rocks. It’s really important not just for landslides, but also for earthquakes and even for the stability of the land. And that’s why these observations on an ice moon are interesting and thought-provoking.”