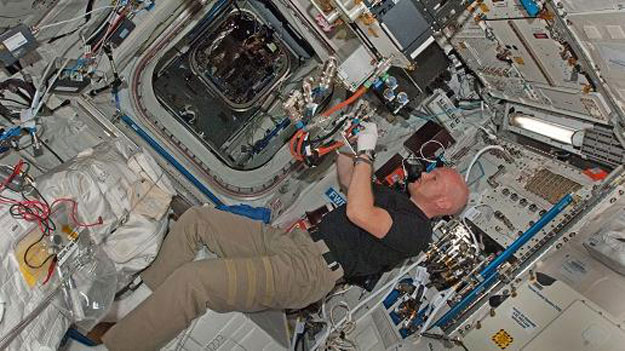 Geoflow, the geophysical experimental system built by Airbus Defence and Space on behalf of the European Space Agency (ESA), is once again being used on board the International Space Station (ISS).

The photo shows German astronaut Alexander Gerst starting to reinstall the system. In the coming weeks, the laboratory’s scientific instruments and the operational readiness of the system’s ground segment will first be checked before a new series of experiments can be started.

The purpose of Geoflow research, led by the Brandenburg University of Technology (BTU) in Cottbus, Germany, is to learn more about convection currents beneath the Earth’s surface like magma movement. The Cottbus experiment recreates a kind of miniature Earth. Thanks to zero gravity conditions, its currents can be studied in the space laboratory under force fields that can be modified. This is achieved by using a viscous fluid to fill the space between two concentric spheres of varying temperature, which rotate when a high voltage is applied (to simulate an “artificial” gravity field). A laser-based camera system is inserted into the fluid to photograph the pattern of the “magma” currents.

Since 2012, the module built in Friedrichshafen, Germany, already has proven in two series of experiments that it can successfully simulate currents in the Earth’s mantle.

About Airbus Defence and Space
Airbus Defence and Space is a division of Airbus Group formed by combining the business activities of Cassidian, Astrium and Airbus Military. The new division is Europe’s number one defence and space enterprise, the second largest space business worldwide and among the top ten global defence enterprises. It employs some 40,000 employees generating revenues of approximately €14 billion per year.