By SpaceRef Editor
January 5, 2012
Filed under Astrophysics, Gemini Observatory, US 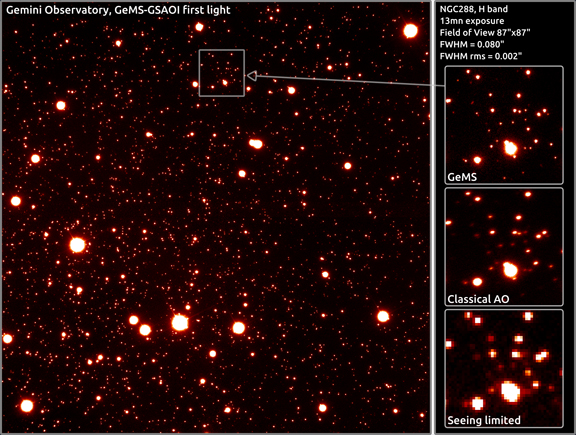 On December 16, 2011, a decade of hard work culminated at the Gemini South telescope in Chile, when a next-generation adaptive optics (AO) system produced its first ultra-sharp wide field image. The first target image showed a portion of a dense cluster of stars called NGC 288. This first light image reveals details at nearly the theoretical limit of Gemini’s large 8-meter mirror over an unprecedented large patch of the night sky.

The crispness of the first-light image clearly demonstrates the potential of the system, which is poised to provide astronomers with a powerful new tool for the study of a wide range of phenomena: from black holes at the centers of galaxies to the life histories of stars.

Called the Gemini Multi-conjugate adaptive optics System (GeMS for short), it uses five artificial guide stars made by a laser to provide extreme clarity over the largest area of night sky ever captured in a single AO observation — an area of the night sky which is 10 times larger than that covered by any other existing AO system in the world.

The reaction to this achievement has been swift and positive. When Space Telescope Science Institute director Matt Mountain saw the first light image, he praised the GeMS instrument team: “Incredible! You have truly revolutionized ground-based astronomy!”

Mountain was the director of the Gemini Observatory when the GeMS project began a decade ago. He also put together the original team, selecting Francois Rigaut as the lead scientist to develop the GeMS instrument.

Rigaut was in the Observatory’s control room high in the Chilean Andes when the new infrared image first appeared on the viewing monitor.

“We couldn’t believe our eyes!” Rigaut recalls. “The image of NGC 288 revealed thousands of pinpoint stars. Its resolution is Hubble-quality — and from the ground this is phenomenal.”

Rigaut explained that with the new gain in angular resolution the crowded city of stars captured in the first light image appears no more densely populated than a typical field in the Milky Way. “This is somewhat uncharted territory: no one has ever made images so large with such a high angular resolution.”

University of Toronto astronomer Roberto Abraham, one of a community of hundreds of astronomers worldwide who uses the 8-meter Gemini telescopes for cutting-edge research, was less reserved: “This is fan-freaking-tastic!!!!!!!” he wrote.

The first-light observing run culminated a decade-long effort in instrument planning and development. “We were lucky to have clear weather and stable atmospheric conditions that night,” said Gemini AO scientist Benoit Neichel. “Even despite interruptions of the laser propagation due to satellites and planes passing by, we obtained our first image with the system. It was surprisingly crisp and large, with an exquisitely uniform image quality.”

Gemini’s new system overcomes two limitations that have plagued the previous generation of AO systems: (1) a limited number of stars bright enough to guide on; and (2) a small field-of-view (the size of the patch of sky observed in a single observation).

While not a new solution, lasers have proved to be an effective solution to the first problem. When no “natural” guide star is available, an artificial one is created using a powerful laser emitting the well-known orange color used in some streetlights. This laser guide star technology is currently being used by observatories around the world, including both Gemini telescopes in Chile and Hawai’i.

Gemini solved the field-of-view problem with a technique called Multi-Conjugate Adaptive Optics (MCAO). By using five laser guide stars (rather than a single one as in other systems), tomographic atmospheric modeling techniques borrowed from medical imaging, and several deformable mirrors, MCAO extends the field-of-view of AO systems by 10 times or more; it also produces images with exquisitely uniform image quality across the entire field-of-view. GeMS is the first of its kind to combine laser guide stars with MCAO, which opens up more of the nighttime sky for detailed study.

“MCAO is game-changing,” Abraham said. “It’s going to propel Gemini to the next echelon of discovery space as well as lay a foundation for the next generation of extremely large telescopes. Gemini is going to be delivering amazing science while paving the way for the future.”

GeMS development started at Gemini in the early 2000s. The system was assembled in the Gemini instrumentation laboratories over the past four years and uses an infrared imager called the Gemini South AO Imager (GSAOI) built at the Australian National University. The GeMS team field-tested it on the telescope during several commissioning periods in 2011, and performed the final tests in mid-December.

GeMS work will continue through the first half of 2012. Testing will focus on stability, performance optimization, and integration into operations. It will gradually be opened to the Gemini astronomy community during 2012.

Background on Adaptive Optics: Taking the Twinkle Out of Starlight

Why adaptive optics? It’s the answer to some of the problems created by Earth’s atmosphere that have plagued astronomers for centuries. The atmosphere has two detrimental effects for astronomical observations. First, it filters out some incoming ultraviolet and part of the infrared spectrum. Second, warm and cold air mixing together create atmospheric turbulence, which causes starlight to twinkle and ground-based telescopic images to blur: a phenomenon called “seeing.” In good seeing, the atmosphere does not distort starlight as much as it does in bad seeing.

To surmount these two problems, some scientists have sent telescopes into orbit, an idea first suggested by German rocket scientist Hermann Oberth in the early 1920s. Although very successful, these endeavors are also very expensive.

In the 1950s, however, astronomer Horace Babcock (Mt. Wilson Observatory) derived an idea for solving the second problem. He imagined improving “seeing” by compensating for atmospheric distortions with special optics.

The first prototypes for astronomy of his novel idea were built in the 1980s and came to be known as adaptive optics (AO). The method uses a combination of light-wave sensors and deformable mirrors. AO un-poetically removes the twinkle from the star’s light and restores the ultimate angular resolution limit from a telescope’s optics. The end result is as if the atmospheric turbulence didn’t exist. By using AO on the current generation of large telescopes, this typically means being able to see a hundred times more detail in images of planets, stars, nebulae, or galaxies.

The Gemini Observatory is an international collaboration with two identical 8-meter telescopes. The Frederick C. Gillett Gemini Telescope is located on Mauna Kea, Hawai’i (Gemini North) and the other telescope on Cerro Pachon in central Chile (Gemini South); together the twin telescopes provide full coverage over both hemispheres of the sky. The telescopes incorporate technologies that allow large, relatively thin mirrors, under active control, to collect and focus both visible and infrared radiation from space.