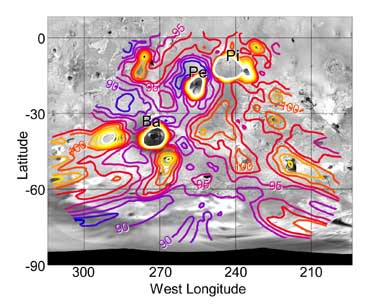 Nighttime temperatures in the southern hemisphere of Jupiter’s moon Io, mapped here with data from NASA’s Galileo spacecraft, give hints about the textures of surface materials, as well as the locations of volcanic hot spots.

The photopolarimeter/radiometer instrument on Galileo collected the information during an Aug. 6, 2001 flyby of Io, yielding the most detailed temperature map yet for this region. Features are visible as small as 150 kilometers (93 miles) across. The temperature map is superimposed here on images from Galileo’s camera, covering volcanoes Pele (Pe), Pillan (Pi), Babbar (Ba) and others. It extends southward almost to Io’s south pole. The contour interval is 2.5 degrees Kelvin (4.5 degrees Fahrenheit), but contours above 110 Kelvin (minus 262 Farenheit) have been omitted to reveal the volcanic hot spots that produce these relatively high temperatures.

Some of the most interesting features on this map occur in the regions between the hot spots. The hot spot of the Pele volcano is surrounded by concentric temperature patterns that echo Pele’s concentric rings of volcanic plume debris, which can be seen in full-color visible-light images. Close to the volcano, temperatures drop below 87 Kelvin (minus 303 Fahrenheit, among the coldest on Io), corresponding to a yellowish inner portion of material ejected from the volcano. A ring of higher temperatures, up to 105 Kelvin (minus 271 Fahrenheit), surrounds this cold area and coincides with an orange ring of volcanic debris seen in full-color visible-light images.

These concentric temperature patterns probably reflect variations in the texture of the deposits from Pele’s volcanic plume, because textures affect the surfaces’ ability to retain heat through the night. The yellow material may be exceptionally fluffy, so it cools quickly at night, while the orange material is more compact and better at retaining heat. Also of interest is the strange fact, first noted on Galileo’s February 2000 Io flyby, that nighttime temperatures do not drop off significantly between the equator and the poles. Because the nighttime temperatures away from the volcanoes are probably largely determined by sunlight absorbed during the previous day, and the poles receive less sunlight than the equator, lower nighttime temperatures are expected at high latitudes, just as on Earth. Temperatures between the volcanoes are typically in the range of 90 to 100 Kelvin (minus 298 to minus 280 Fahrenheit) regardless of latitude.