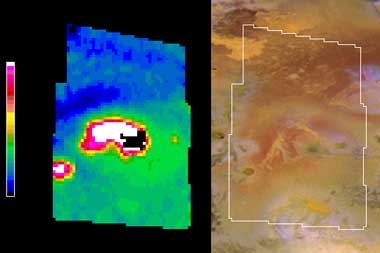 NASA’s Galileo spacecraft has returned infrared imagery of a new hot spot on Jupiter’s moon Io that was the source of a towering plume in August 2001, indicating a sulfur-dioxide concentration that may have been fallout from the plume.

Galileo’s near-infrared mapping spectrometer captured the image on the left during an Oct. 16, 2001 flyby of Io. Coloring indicates the intensity of glowing at a wavelength of 4.1 microns. Yellow, red, and white represent high temperatures. Black is where the near-infrared glow was so intense the image was saturated. Greens and blues are cold. The visible-light image on the right was obtained by Galileo’s camera in 1999, before any volcanic activity was seen at this site. The first sign of activity came in August 2001, when Galileo detected an infrared hot spot and the tallest volcanic plume ever seen at Io.

The dark blue band north of the hot spot in the new infrared image represents a concentration of sulfur-dioxide, which has a strong signature in the infrared. The sulfur-dioxide is thought to be from the fallout of the plume. The image shows high temperatures corresponding to yellow flows in the center of the visible-light image, and from a small caldera at the 8 o’clock position.