More than 12 billion years of cosmic history are shown in an unprecedented, panoramic, full-color view of thousands of galaxies in various stages of assembly.

This image, taken by NASA’s Hubble Space Telescope, was made from mosaics taken in September and October 2009 with the newly installed Wide Field Camera 3 (WFC3) and in 2004 with the Advanced Camera for Surveys (ACS). The view covers a portion of the southern field of a large galaxy census called the Great Observatories Origins Deep Survey (GOODS), a deep-sky study by several observatories to trace the evolution of galaxies.

The final image combines a broad range of colors, from the ultraviolet, through visible light, and into the near-infrared. Such a detailed multi-color view of the universe has never before been assembled at such a level of clarity, accuracy, and depth.

Hubble’s sharp resolution and new color versatility, produced by combining data from the two cameras, are allowing astronomers to sort out the various stages of galaxy formation. The image reveals galaxy shapes that appear increasingly chaotic at each earlier epoch, as galaxies grew through accretion, collisions, and mergers. The galaxies range from the mature spirals and ellipticals in the foreground, to smaller, fainter, irregularly shaped galaxies, most of which are
farther away, and therefore existed farther back in time. These smaller galaxies are considered the building blocks of the larger galaxies we see today. 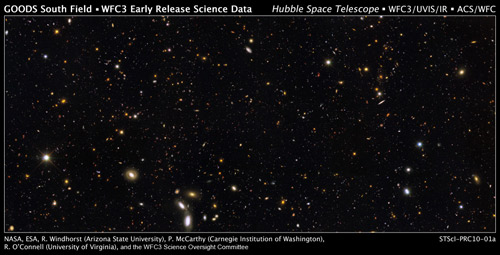 Astronomers are using this multi-color panorama to trace many details of galaxy evolution over cosmic time, including the star-formation rate in galaxies, the rate of mergers among galaxies, and the abundance of weak active galactic nuclei.

The image shows a rich tapestry of 7,500 galaxies stretching back through most of the universe’s history. The closest galaxies seen in the foreground emitted their observed light about a billion years ago. The farthest galaxies, a few of the very faint red specks, are seen as they appeared more than 13 billion years ago, or roughly 650 million years after the Big Bang. This mosaic spans a slice of space that is equal to about a third of the diameter of the full Moon (10 arc
minutes).

The new Hubble view highlights a wide variety of stages in the galaxy assembly process. Ultraviolet light taken by WFC3 shows the blue glow of hot, young stars in galaxies teeming with star birth. The orange light reveals the final buildup of massive galaxies about 8 to 10 billion years ago. The near-infrared light displays the red glow of very distant galaxies — in a few cases as far as 12 billion to 13 billion light-years away — whose light has been stretched, like a toy Slinky, from ultraviolet light to longer-wavelength infrared light due to the expansion of the universe.