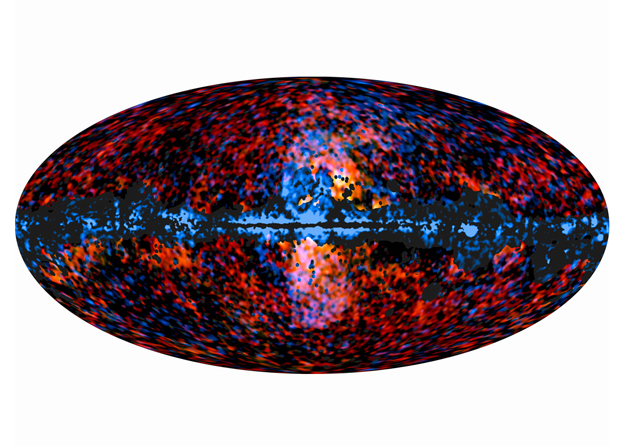 Enormous outflows of charged particles from the center of our galaxy, stretching more than halfway across the sky and moving at supersonic speeds, have been detected and mapped with CSIRO’s 64-m Parkes radio telescope.

Corresponding to the “Fermi Bubbles” found in 2010, the recent observations of the phenomenon were made by a team of astronomers from Australia, the USA, Italy and The Netherlands, with the findings reported in today’s issue of Nature.

“There is an incredible amount of energy in the outflows,” said co-author Professor Lister Staveley-Smith from The University of Western Australia node of the International Center for Radio Astronomy Research in Perth and Deputy Director of the ARC Center of Excellence for All-sky Astrophysics (CAASTRO).

“The source of the energy has been somewhat of a mystery, but we know there is a lot there, about a million times as much energy as a supernova explosion (a dying star).”

“Our solar system is located approximately 30,000 light-years from the center of the Milky Way Galaxy, but we’re perfectly safe as the jets are moving in a different direction to us,” said Professor Staveley-Smith.

Seen from Earth, but invisible to the human eye, the outflows stretch about two-thirds across the sky from horizon to horizon.

“Adding observations by the ground-based Parkes radio telescope to those made in the past by space telescopes finally allows us to understand how these enormous outflows are powered,” said Professor Staveley-Smith.

Previously it was unclear whether it was quasar-like activity of our galaxy’s central super-massive black hole or star formation that kept injecting energy into the outflows.

The recent findings, reported in Nature today, show that the phenomenon is driven by many generations of stars forming and exploding in the galactic center over the last hundred million years.

“We were able to analyze the magnetic energy content of the outflows and conclude that star formation must have happened in several bouts,” said CAASTRO Director Professor Bryan Gaensler.

Further analyzes of the polarization properties and magnetic fields of the outflows can also help us to answer one of astronomy’s big questions about our galaxy.

“We found that the outflows’ radiation is not homogenous but that it actually reveals a high degree of structure — which we suspect is key to how the galaxy’s overall magnetic field is generated and maintained,” said Professor Gaensler.

The research was led by Dr. Ettore Carretti from the Commonwealth Science and Industrial Research Organization.