By SpaceRef Editor
September 7, 2004
Filed under Astrophysics, Gemini Observatory, US

A stunning image released today by the Gemini
Observatory captures the graceful interactions of a
galactic ballet, on a stage some 300 million light years
away, that might better be described as a
contortionist’s dance.

The galaxies, members of a famous troupe called
Stephan’s Quintet, are literally tearing each other apart.
Their shapes are warped by gravitational interactions
occurring over millions of years. Sweeping arches of
gas and dust trace the interactions and possible
ghost-like passage of the galaxies through one
another. The ongoing dance deformed their structures
while spawning a prolific fireworks display of star
formation fueled by clouds of hydrogen gas that were
shocked into clumps to form stellar nurseries.

This unprecedented image of the cluster provides a
unique combination of sensitivity, high resolution and
field of view. “It doesn’t take long to reach an incredible
depth when you have an 8-meter mirror collecting light
under excellent conditions,” said Travis Rector of the
University of Alaska, Anchorage who helped obtain the
data with the Gemini North Telescope on Mauna Kea.
“We were able to capture these galaxies at many
different wavelengths or colors. This allowed us to
bring out some remarkable details in the final color
image that have never been seen before in one view.” 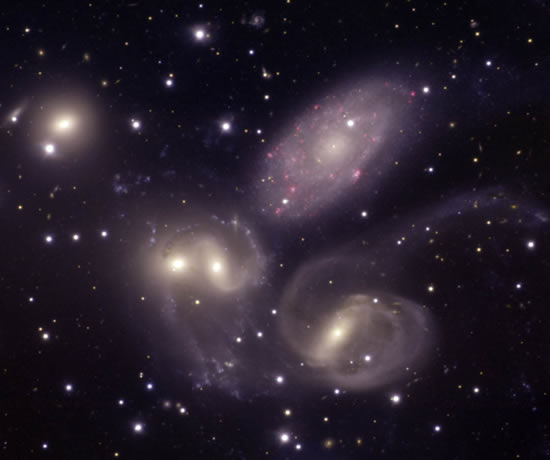 One striking element of the image is a collection of
vibrant red clumps that mark star-forming regions
within a galaxy called NGC 7320. Although its relation
to the other galaxies in the cluster has been the subject
of some controversy, most astronomers now think that
the galaxy leads a relatively tranquil existence in the
foreground, safely isolated from the violent quarrels of
the more distant cluster.

Spectroscopic data show that NGC 7320 has an
apparent velocity away from us of about 800 kilometers
per second. In contrast, the rest of the group is being
carried away from us by the expansion of the universe
at over 6,000 kilometers per second. Using current
models for the expanding universe, this would put the
bulk of the cluster almost 8 times farther away from us
than NGC 7320.

The vivid red patches scattered across the spiral arms
of NGC 7320 in the new Gemini image provide a
dramatic illustration of how these differing apparent
velocities can impact our view. NGC 7320 and the other
cluster galaxies have regions of intense star formation
indicated by glowing clouds of hydrogen gas called HII
regions. These areas appear distinctly red because a
selective filter was used which only passes a special
color of red light, called hydrogen alpha, that is
produced in the HII regions. In the higher-velocity
members of the cluster, prominent HII clumps
dominate around the two closely interacting central
galaxies but they do not appear red in the image. In
these galaxies, the HII glow was Doppler-shifted
beyond the range of the selective filter, and was
therefore not detected.

The interacting members of Stephan’s Quintet appear
destined to continue their dance for millions more
years. Eventually, this dance will probably cause some
of the galaxies in the cluster to completely lose their
current identity, combining into even fewer objects than
we see today.

Stephan’s Quintet was discovered in 1877 by the
French astronomer Edouard Stephan using the
Foucault 80-centimeter reflector at the Marseilles
Observatory. The cluster is listed in the Hickson
Compact Group Catalog as number 92. It has been
studied extensively at all wavelengths including
imaging by the Hubble Space Telescope.

FULL RESOLUTION IMAGES AND ADDITIONAL DETAILS CAN
BE FOUND AT:

Alternately, the full-resolution image can be obtained
from the following ftp site:

The Gemini Observatory is an international
collaboration that has built two identical 8-meter
telescopes. The Frederick C. Gillett Gemini
Telescope is located on Mauna Kea, Hawai`i
(Gemini North) and the Gemini South telescope is
located on Cerro Pachon in central Chile (Gemini
South), and hence provide full coverage of both
hemispheres of the sky. Both telescopes incorporate
new technologies that allow large, relatively thin
mirrors under active control to collect and focus both
optical and infrared radiation from space.

The Gemini Observatory provides the astronomical
communities in each partner country with state-of-
the-art astronomical facilities that allocate observing
time in proportion to each country’s contribution. In
addition to financial support, each country also
contributes significant scientific and technical
resources. The national research agencies that form
the Gemini partnership include: the US National
Science Foundation (NSF), the UK Particle Physics
and Astronomy Research Council (PPARC), the
Canadian National Research Council (NRC), the
Chilean Comision Nacional de Investigacion
Cientifica y Tecnologica (CONICYT), the Australian
Research Council (ARC), the Argentinean Consejo
Nacional de Investigaciones Cientificas y Tecnicas
(CONICET) and the Brazilian Conselho Nacional de
Desenvolvimento Cientifico e Tecnologico (CNPq).
The Observatory is managed by the Association of
Universities for Research in Astronomy, Inc. (AURA)
under a cooperative agreement with the NSF. The
NSF also serves as the executive agency for the
international partnership.