By SpaceRef Editor
January 13, 2011
Filed under Astrophysics, University of California, Berkeley, US 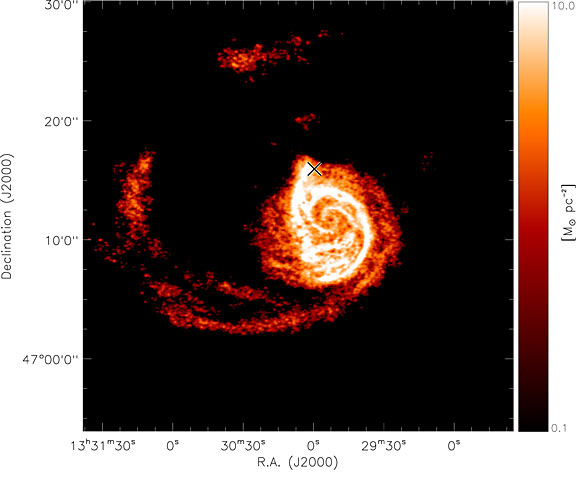 The distribution of HI hydrogen in the Whirlpool Galaxy (M51) as determined by the THINGS VLA survey extends far beyond the visible stars in the galaxy and its satellite NGC 5195 (marked by cross), which is situated in the short arm of the spiral. Analysis of perturbations in the hydrogen distribution can be used to predict the location of such satellites, in particular, those satellites that are composed primarily of dark matter and are thus too faint to be detected easily. (Click image for hi-res version.) (Sukanya Chakrabarti/UC Berkeley)

Planet X, an often-sought 10th planet, is so far a no-show, but Sukanya Chakrabarti has high hopes for finding what might be called Galaxy X – a dwarf galaxy that she predicts orbits our Milky Way Galaxy.

Many large galaxies, such as the Milky Way, are thought to have lots of satellite galaxies too dim to see. They are dominated by “dark matter,” which astronomers say makes up 85 percent of all matter in the universe but so far remains undetected.

Chakrabarti, a post-doctoral fellow and theoretical astronomer at the University of California, Berkeley, has developed a way to find “dark” satellite galaxies by analyzing the ripples in the hydrogen gas distribution in spiral galaxies. Planet X was predicted – erroneously – more than 100 years ago based on perturbations in the orbit of Neptune.

Earlier this year, Chakrabarti used her mathematical method to predict that a dwarf galaxy sits on the opposite side of the Milky Way from Earth, and that it has been unseen to date because it is obscured by the intervening gas and dust in the galaxy’s disk. One astronomer has already applied for time on the Spitzer Space Telescope to look in infrared wavelengths for this hypothetical Galaxy X.

“My hope is that this method can serve as a probe of mass distribution and of dark matter in galaxies, in the way that gravitational lensing today has become a probe for distant galaxies,” Chakrabarti said.

Since her prediction for the Milky Way, Chakrabarti has gained confidence in her method after successfully testing it on two galaxies with known, faint satellites. She will report the details of these tests during an oral presentation at 2 p.m. PST Thursday, Jan. 13, during a meeting of the American Astronomical Society in Seattle, Wash. She also will discuss her findings at a 9 a.m. PST press conference on Thursday.

“This approach has broad implications for many fields of physics and astronomy – for the indirect detection of dark matter as well as dark-matter dominated dwarf galaxies, planetary dynamics, and for galaxy evolution driven by satellite impacts,” she said.

Chakrabarti’s colleague Leo Blitz, a UC Berkeley professor of astronomy, said that the method could also help test an alternative to dark matter theory, which proposes a modification to the law of gravity to explain the missing mass in galaxies.

“The matter density in the outer reaches of spiral galaxies is hard to explain in the context of modified gravity, so if this tidal analysis continues to work, and we can find other dark galaxies in distant halos, it may allow us to rule out modified gravity,” he said. 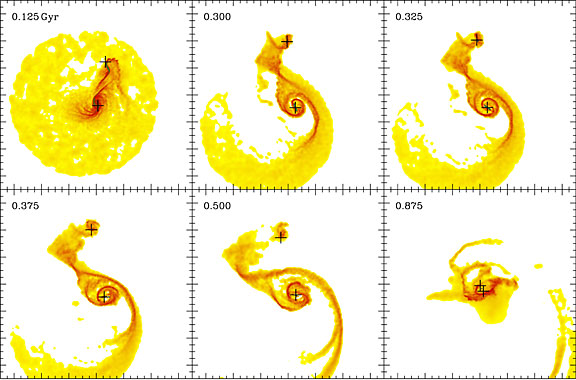 A simulation of the evolution of hydrogen gas in the Whirlpool Galaxy, M51 (central cross), and its satellite, NGC 5195 (top cross), over a period of 875 million years (0.875 Gy). The best fit to the current gas distribution implies that what we see today evolved over a period of about 300 million years. The boxes are 140,000 parsecs (456,000 light years) on a side. (Click image for hi-res version.) (Sukanya Chakrabarti/UC Berkeley)

The Milky Way is surrounded by some 80 known or suspected dwarf galaxies that are called satellite galaxies, even though some of them may just be passing through, not captured into orbits around the galaxy. The Large and Small Magellanic Clouds are two such satellites, both of them irregular dwarf galaxies.

Theoretical models of rotating spiral galaxies, however, predict that there should be many more satellite galaxies, perhaps thousands, with small ones even more prevalent than large ones. Dwarf galaxies, however, are faint, and some of the galaxies may be primarily invisible dark matter.

Chakrabarti and Blitz realized that dwarf galaxies would create disturbances in the distribution of cold atomic hydrogen gas (H I) within the disk of a galaxy, and that these perturbations could reveal not only the mass, but the distance and location of the satellite. The cold hydrogen gas in spiral galaxies is gravitationally confined to the plane of the galactic disk and extends much farther out than the visible stars – sometimes up to five times the diameter of the visible spiral. The cold gas can be mapped by radio telescopes.

“The method is like inferring the size and speed of a ship by looking at its wake,” said Blitz. “You see the waves from a lot of boats, but you have to be able to separate out the wake of a medium or small ship from that of an ocean liner.”

The technique Chakrabarti developed involves a Fourier analysis of the gas distribution determined by high-resolution radio observations. Her initial predication of Galaxy X around the Milky Way was made possible by a wealth of data already available on the atomic hydrogen in our galaxy. To test her theory on other galaxies, she and her collaborators used recent data from a radio survey called The HI Nearby Galaxy Survey (THINGS), conducted by the Very Large Array, as well as its extension to the Southern Hemisphere, THINGS-SOUTH, a survey carried out by the Australia Telescope Compact Array.

”These new high-resolution radio data open up a wealth of opportunities to explore the gas distributions in the outskirts of galaxies”, said co-author Frank Bigiel, a UC Berkeley post-doctoral fellow who is also co-investigator of the THINGS and THINGS-SOUTH projects.

Collaborating with Bigiel and Phil Chang of the Canadian Institute of Theoretical Astrophysics, Chakrabarti looked at data for the Whirlpool Galaxy (M51), which has a companion galaxy one-third the size of M51, and NGC 1512, with a satellite one-hundredth the size of the galaxy. Her mathematical analysis correctly predicted the mass and location of these satellites.

She said her technique should work for satellite galaxies as small as one-thousandth the mass of the primary galaxy.

Chakrabarti predicted the mass of Galaxy X, for example, to be one-hundredth that of the Milky Way itself. Based on her calculations with Blitz, the galaxy currently sits across the Milky Way somewhere in the constellations of Norma or Circinus, just west of the galactic center in Sagittarius when viewed from Earth.

She contrasts her prediction of Galaxy X with previous arguments for a Planet X beyond the orbit of Neptune. In the 19th century, what would have been at the time a ninth planet was proposed by famed astronomer Percival Lowell, but his prediction turned out to be based on incorrect measurements of Neptune’s orbit. In fact, Pluto and other objects in the Kuiper Belt, where the planet was predicted to reside, have masses far too low to exert a measurable gravitational effect on Neptune or Uranus, Chakrabarti said. Since then, perturbations in the orbits of other bodies in the solar system have set off periodic searches for a 10th planet beyond the now “dwarf” planet Pluto.

On the other hand, Galaxy X – or a satellite galaxy one-thousandth the mass of the Milky Way – would still exert a large enough gravitational effect to cause ripples in the disk of our galaxy.

Chakrabarti and Blitz also calculated that the predicted galaxy is in a parabolic orbit around the Milky Way, now at a distance of about 300,000 light years from the galactic center. The galactic radius is about 50,000 light years.

“Our paper is a proof of principle, but we need to look at a much larger sample of spiral galaxies with optically visible galactic companions to determine the incidence of false positives,” and thus the method’s reliability, Chakrabarti said.