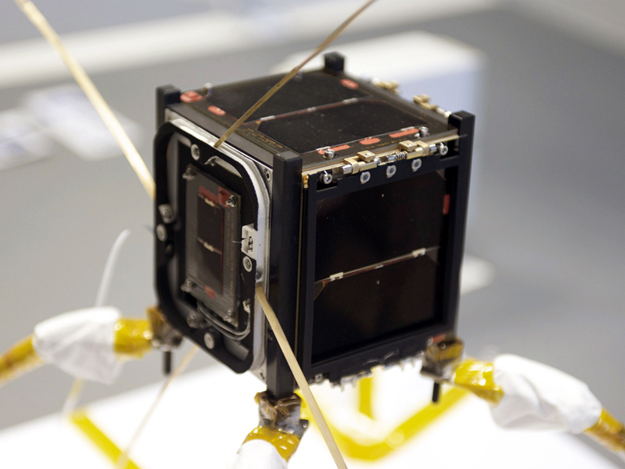 Image: XaTcobeo is the CubeSat built by the University of Vigo and INTA, another CubeSat selected for the Vega Maiden Flight in 2012. The picture shows the deployed antenna during functional tests. ESA

ESA invites European student teams who are building CubeSats with mainly educational objectives to propose their satellite for the new ‘Fly Your Satellite!’ programme.

‘Fly Your Satellite!’ is an exciting new initiative from the ESA Education and Knowledge Management Office. It is focused on CubeSat projects run by university students and builds on the successful ‘CubeSats for the Vega Maiden Flight’ pilot programme, which culminated in 2012 with the launch of seven university student-built CubeSats on board the Vega Maiden Flight.

In the future, this new initiative is intended to cover the complete development process of a satellite from concept to launch. However, the 2013 edition will be dedicated to teams whose satellite is already at an advanced stage of development and able to complete the Flight Model assembly by June 2013. One, two or three-unit CubeSats are eligible.

The ‘Fly Your Satellite!’ programme envisages three consecutive activity phases, with intermediate reviews that the student teams will have to pass to be accepted into the next phase.

During Phase 1 the CubeSat teams shall complete the integration and functional testing of their CubeSat’s Flight Model in ambient conditions. They shall submit related documentation and data packages to be compiled following ESA guidelines.

At the end of Phase 1, the CubeSats development status and their data package documentation will be reviewed by ESA specialists who will select the teams for Phase 2 (the environmental test campaign).

A CubeSat team cleaning their CubeSat before integration. During Phase 2 the selected teams will be supported by ESA during the task of performing environmental tests on their satellites. These will include vibration and thermal-vacuum tests. For this activity, ESA will offer the use of a Thermal Vacuum chamber and a mechanical shaker.

The definition of the launcher and the mission’s environmental requirements are not yet expected to be known by the time of Phase 2. Therefore the environmental tests will be performed against an envelope of generic requirements that will be agreed between the ESA specialists and the CubeSat teams.

During this phase, in which the satellite performances will have to be assessed before and after the test campaign, the teams shall prepare and then submit the so-called Acceptance Data Packages. These shall be compiled following ESA guidelines and shall include the documentation of the test campaign.

At the end of Phase 2, the satellites’ documentation will be reviewed by ESA and the best CubeSat teams will be selected for a launch opportunity – their Ticket to Orbit!.

The ESA Education Office will facilitate the procurement of a launch opportunity that is still to be defined. Therefore, start-time and duration of Phase 3 will depend on the actual launch date.

The CubeSats selected for a Ticket to Orbit! will be launched if and only if the respective teams provide proof of the CubeSat frequency registration with the International Amateur Radio Union (IARU) and the International Telecommunication Union (ITU), and proof of the satellite’s registration on the United Nations (UNOOSA) Register of Objects Launched into Outer Space.

The selected CubeSats will be installed inside CubeSat orbital deployers, and, after a campaign of integrated tests (to be performed against the environmental requirements of the real mission), the flight hardware will be shipped to the launch site for the launch campaign.

Funding The teams participating in ‘Fly Your Satellite!’ shall rely on their own sponsors to fund the development of their satellite.

The student teams shall also rely on their own independent funding to support performing the launch campaign (including travel and lodging) and the satellite operations.

ESA sponsorship will include covering the following expenses:

Part of the travelling costs for the participation of the students in ESA workshops and reviews of the ‘Fly Your Satellite!’ project (at ESTEC); The time of the ESA specialists who will follow up, lecture and review the student activities; Use of test facilities. Candidate CubeSat missions The proposed CubeSat mission shall be flexible enough to adapt to a variety of possible different low Earth orbits since the final launch opportunity has not yet been determined.

Applications The deadline for submitting the proposals is 1 March 2013.

The opportunity will be open to European university teams from ESA Member States or Cooperating States*.

Universities and students from ESA Cooperating States are eligible only if their national space offices or agencies formally endorse their application and are available to contribute to the ESA costs in case the proposal from their university is selected.