By SpaceRef Editor
September 18, 2003
Filed under Harvard-Smithsonian Center for Astrophysics, US 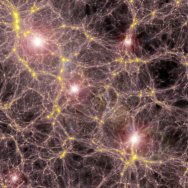 The early universe was a barren wasteland of hydrogen, helium, and a touch
of lithium, containing none of the elements necessary for life as we know
it. From those primordial gases were born giant stars 200 times as massive
as the sun, burning their fuel at such a prodigious rate that they lived for
only about 3 million years before exploding. Those explosions spewed
elements like carbon, oxygen and iron into the void at tremendous speeds.
New simulations by astrophysicists Volker Bromm (Harvard-Smithsonian Center
for Astrophysics), Naoki Yoshida (National Astronomical Observatory of
Japan) and Lars Hernquist (CfA) show that the first, “greatest generation”
of stars spread incredible amounts of such heavy elements across thousands
of light-years of space, thereby seeding the cosmos with the stuff of life.

This research will be published in an upcoming issue of The Astrophysical
Journal Letters.

“We were surprised by how violent the first supernova explosions were,” says
Bromm. “A universe that was in a pristine state of tranquility was rapidly
and irreversibly transformed by a colossal input of energy and heavy
elements, setting the stage for the long cosmic evolution that eventually
led to life and intelligent beings like us.”

Approximately 200 million years after the Big Bang, the universe underwent a
dramatic burst of star formation. Those first stars were massive and
fast-burning, quickly fusing their hydrogen fuel into heavier elements like
carbon and oxygen. Nearing the end of their lives, desperate for energy,
those stars burned carbon and oxygen to form heavier and heavier elements
until reaching the end of the line with iron. Since iron cannot be fused to
create energy, the first stars then exploded as supernovae, blasting the
elements that they had formed into space.

Each of those first giant stars converted about half of its mass into heavy
elements, much of it iron. As a result, each supernova hurled up to 100
solar masses of iron into the interstellar medium. The death throes of each
star added to the interstellar bounty. Hence, by the remarkably young age of
275 million years, the universe was substantially seeded with metals.

That seeding process was aided by the structure of the infant universe,
where small protogalaxies less than one-millionth the mass of the Milky Way
crammed together like people on a crowded subway car. The small sizes of and
distances between those protogalaxies allowed an individual supernova to
rapidly seed a significant volume of space.

Supercomputer simulations by Bromm, Yoshida, and Hernquist showed that the
most energetic supernova explosions sent out shock waves that flung heavy
elements up to 3,000 light-years away. Those shock waves swept huge amounts
of gas into intergalactic space, leaving behind hot “bubbles,” and triggered
new rounds of star formation.

Supernova expert Robert Kirshner (CfA) says, “Today this is a fascinating
theory, based on our best understanding of how the first stars worked. In a
few years, when we build the James Webb Space Telescope, the successor to
the Hubble Space Telescope, we should be able to see these first supernovae
and test Volker’s ideas. Stay tuned!”

Lars Hernquist notes that the second generation of stars contained heavy
elements from the first generation – seeds from which rocky planets like
Earth could grow. “Without that first, ‘greatest generation’ of stars, our
world would not exist.”

Headquartered in Cambridge, Mass., the Harvard-Smithsonian Center for
Astrophysics is a joint collaboration between the Smithsonian Astrophysical
Observatory and the Harvard College Observatory. CfA scientists, organized
into six research divisions, study the origin, evolution and ultimate fate
of the universe.