Corona, which had to surpass technical barriers never crossed before, served as a foundation program for the NRO. Launched into polar orbits by U.S. Air Force Thor boosters, the spacecraft flew at approximate altitudes of 100 nautical miles to take pictures of selected target areas. The exposed film, some 2.1 million feet, was returned to earth in capsules ejected from the satellites.

The program flew 145 missions, producing more than 800,000 images critical to national security during its 12-year duration. Corona marked many ‘firsts’ in space history, including the first recovery of a manmade object (capsule) from space and the first Lockheed Martin satellite in space. The first image from Corona was 104 days after U2 flights were suspended over the former Soviet Union following the shoot down of Francis Gary Powers in May 1960.

“The successes achieved by the Corona team were monumental in protecting our nation and advancing aerospace technology,” said Joanne Maguire, executive vice president of Lockheed Martin Space Systems Company. “Having worked with our government partners on such a vitally important ground-breaking program is a source of tremendous pride for the team. Corona paved the way for far more sophisticated systems that today are providing unprecedented new capabilities for both government and commercial customers around the globe.” 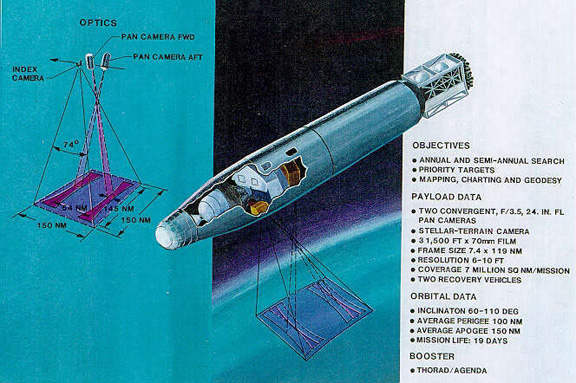 Lockheed Martin heritage company, Lockheed Missiles & Space Company, was awarded the prime contract for the Corona program in 1956. Lockheed Martin served as technical advisor and integrator to all Corona equipment, except the Thor booster. Lockheed Martin developed the orbiting Agena upper stage; and integrated and led the test, launching and on-orbit control operations of the Corona satellites. The Lockheed Martin-built three-axis stabilized space vehicle, Agena, housed numerous electronics, including the thermally protected reentry capsule containing the satellite’s camera and film. An example of the Corona camera and recovery capsule is on display at the National Air and Space Museum in Washington D.C.

Lockheed Martin’s expertise in stabilized, remote sensing spacecraft for high-resolution remote sensing missions began with the Corona program. Today, Lockheed Martin Space Systems Company is a world leader in the most advanced space-based systems for government and global commercial customers. The company draws on its wealth of expertise in building and integrating advanced remote sensing satellites to provide customers with revolutionary systems such as GeoEye’s IKONOS satellite and NASA’s Mars Reconnaissance Orbiter.

Headquartered in Bethesda, Md., Lockheed Martin is a global security company that employs about 136,000 people worldwide and is principally engaged in the research, design, development, manufacture, integration and sustainment of advanced technology systems, products and services. The Corporation’s 2009 sales from continuing operations were $44.5 billion.

For images and more information on Corona, visit http://www.nro.gov/corona/facts.html