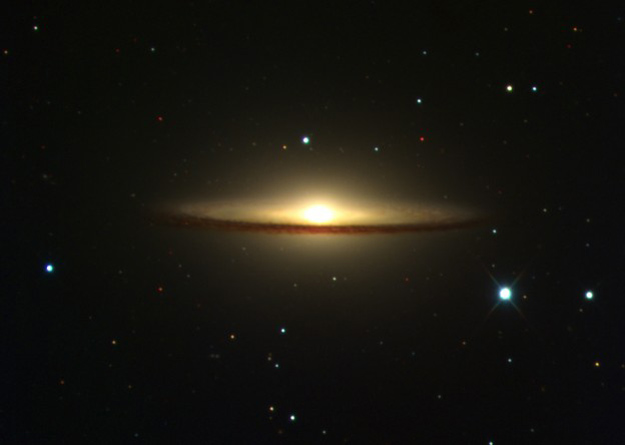 The first truly global telescope came a significant step closer to completion this month with the installation and first light on three new 1-meter telescopes at the South Africa Astronomical Observatory (SAAO) near Sutherland, South Africa. A team of five Las Cumbres engineers, technicians, and a postdoc, convened at Sutherland for three weeks during late February and early March to achieve this feat.

“The South African Astronomical Observatory is pleased to collaborate with the Las Cumbres Observatory Global Telescope project, and we are excited by the prospects for both scientific observations and public outreach activities,” Ted Williams, Director of SAAO said.

Annie Hjelstrom, the project engineer responsible for the successful installation, pointed out that, “We had a great installation team, and SAAO and SALT staff were very helpful, but this is also the culmination of eight years of design and development. Each telescope is built, configured, tested, and then dismantled at the Goleta, California headquarters before we put them back together on site.”

Usually first light images are fairly dry, and several such images were taken at each of the three telescopes. But for the SAAO node, LCOGT founder and lead engineer Wayne Rosing asked former company intern and accomplished astrophotographer B. J. Fulton to acquire images from three different galaxies using the stripped-down capabilities available during the early engineering phases. Fulton, who is now an astronomy graduate student with the University of Hawaii, produced the images over the first few days of telescope operations.

Edward Gomez, Education and Outreach Director of LCOGT, wrote that Fulton “kept the integrity of a first-light image by not touching up the images in any way.” The images were created using command-line tools that work directly on the raw pixel data (e.g., Python, Stiff and ImageMagick). The images do not have flat-fields, darks or biases subtracted. They each combine multiple wavelengths and colors from the use of different filters on the telescope instrument. For example, the images of M104 and M83 each required over 3 hours of exposure time distributed across two Bessel filters with additional exposures using two Sloan filters. For Trumpler 14, Fulton, took over 2 hours of images spread across three Sloan filters. He was able to conduct his observations from Hawaii, while the engineering team in Santa Barbara conducted their tests and the installation team in South Africa completed system tuning and optical collimation steps.

The installation team consisted of Hjelstrom, technicians Mark Crellin from the Birkenhead, England office, Kurt Vander Horst and David Petry from the Goleta office, and astronomy postdoctoral scholar, Abiy Tekola, based at SAAO in Capetown. The telescopes arrived on site on February 18th and were craned into the domes the next day. The telescope in Dome A was assembled with electrical, mirrors, optical tube assembly, and instrument by the end of February 20th, and the telescope went on-sky that night to begin TPOINT runs to set the telescope’s polar alignment. The second and third telescopes followed over the next two days.

The trio of telescopes brings the company’s total of operational 1-meter telescopes to seven. Two more are planned for mid-May at the Siding Spring Observatory to complete the southern ring, and a second telescope will be installed at McDonald Observatory at roughly year-end to create the first northern node.

LCOGT is a private, nonprofit science institute engaged in time domain astrophysics. The LCOGT Science team, led by Science Director Tim Brown, has published extensively on exoplanets, supernovae, and minor planet research, among other research areas. The organization operates the two 2-meter Faulkes Telescopes for which initial capital and operational funding was provided by The Dill Faulkes Educational Trust. LCOGT is now in the process of deploying a global network of 1-meter telescopes.

According to Brown, “The 1-meter telescope network adds a critical astronomical resource. Because the network will span both hemispheres, and because one or more LCOGT nodes will always be in the dark, astronomers can observe from anywhere on earth at nearly any time. Also, these telescopes – robotic, responsive, and numerous – will allow massive but carefully-directed observing campaigns that could never be done before.”

About a third of the network science time in the southern hemisphere is dedicated to the astronomy program of the Scottish Universities Physics Alliance, of which St. Andrews University is a member. St. Andrews has worked with LCOGT over the last seven years on an exoplanet identification and characterization program using the Faulkes Telescopes and is expanding that program onto the larger LCOGT network.

LCOGT also has a science partnership with SAAO. SAAO astronomers will be using the telescopes for their science programs within the next couple of months. Tekola points out that SAAO also plans to use part of their share of network time for education and outreach in South Africa and other African countries.

As the LCOGT network expands the organization will make significant amounts of observing time available for educational projects, in addition to the substantial amount of time which will be available for professional scientists. LCOGT works with groups of education and scientific professionals to develop wide reaching partnerships for scientific research, public engagement and citizen science. Successful LCOGT education programs exist in the United States, the United Kingdom, and Australia.

“We’re very much looking forward to getting the 1-meter network commissioned for science,” LCOGT staff astronomer Rachel Street said. “These telescopes are ideal for the exoplanet characterization, supernovae follow-up and solar system studies our teams specialize in.”