A team of astronomers from The Graduate University for Advanced Studies, the National Astronomical Observatory of Japan, and other universities have captured the first direct image of a young binary star system (Figure 1A, Figure 4). Using the Coronagraphic Imager with Adaptive Optics (CIAO) mounted on the Subaru Telescope, the team observed the young binary star SR24, which is located in the constellation Ophiuchus, 520 light-years away. The data from the team’s observations provide the first solid basis for testing and refining theoretical models of star and planet formation in binary systems.

Our understanding of the creation and development of stars and planets has advanced substantially in the past two decades. Research has confirmed that new stars are often surrounded by disks of dense gas (“protoplanetary disks”) from which planets are believed to form; the radii of these disks can extend distances up to several hundred times farther than the distance between the Sun and the Earth. Scientists have intensively studied the structure of protoplanetary disks at various electromagnetic wavelengths, and our knowledge of the mechanisms of single star formation has increased considerably. Nevertheless, most stars form in binary or multiple (more than two stars) systems, and many unanswered questions remain about how they are born and develop (see Movie 1 and Figure 2 for a numerical simulation of binary formation and Figure 3 for the birth of a binary system). Consequently, studies of protoplanetary disks in binary and multiple systems are essential for making generalizations about the processes of star and planet formation. 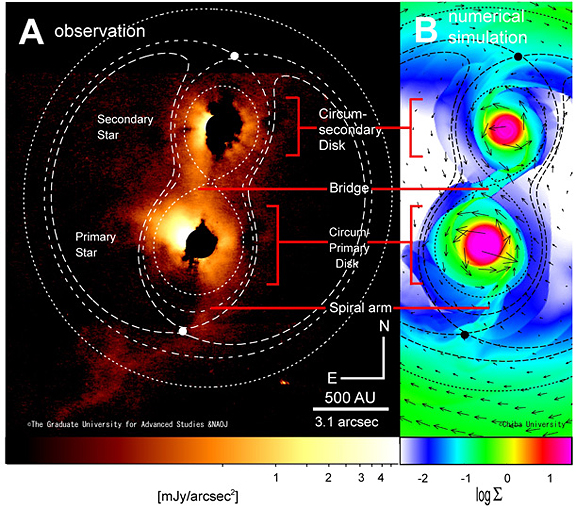 In a binary system, two stars orbit around a common center of mass. The brighter or more massive star is referred to as the primary star and the fainter or less massive one is called the secondary star. A disk of gas and dust surrounds the primary star (“circumprimary disk”); another disk encircles the secondary star (“circumsecondary disk”). A third disk (“circumbinary disk”) may ring the primary and secondary stars and supply mass to the stars’ disks through a stream of gas. Spiral arms of gas and dust may extend from the stars’ disks to feed them with material from the circumbinary disk, thus contributing to the development of their circumstellar disks. However, such disks and spiral arms in binary or multiple systems have rarely been directly imaged or resolved — until now.

The July 2006 observations of the young binary star SR24 by astronomers Dr. Satoshi Mayama (The Graduate University for Advanced Studies or SOKENDAI), Dr. Motohide Tamura (National Astronomical Observatory of Japan or NAOJ and SOKENDAI), Dr. Masahiko Hayashi (NAOJ and SOKENDAI) and colleagues have corrected this deficit and provided data that can be used to test theories about binary system formation. The team captured a high-resolution, near-infrared image of the circumprimary and circumsecondary disks of SR24, the first such image of twin protoplanetary disks around a young stellar object (Figure 1A, Figure 5). They also discovered a long spiral arm extending out from the circumprimary disk, another first in observations of young stars. The image shows a bridge of gas connecting the two disks. The observations provide the first data that can be used to test theoretical models of mass accretion in binary systems.

Astronomers Dr. Tomoyuki Hanawa (Chiba University) and Dr. Tomoaki Matsumoto (Hosei University) analyzed the young binary star and collected information about its attributes. Using a supercomputer, they performed two-dimensional numerical simulations of accretion from a circumbinary disk and were able to generate stellar structures (Figure 1B) that shared common features with the observed image. The agreement between the observations and the simulation suggests that fresh material streams along the spiral arm, replenishing the circumprimary disk with a reservoir of gas contained in a circumbinary disk. As reported in this article, the 0.1 arcsecond image shows the supporting structures of twin protoplanetary disks, which are fed with planet-building materials. Such an image cannot be reproduced by spectroscopic observations or studies of models of spectral energy distribution. The simulations also confirm that the bridge between the twin disks corresponds to gas flow and a shock wave caused by the collision of gas rotating around the primary and secondary stars. The comparison of the simulations with the observation demonstrates a mechanism for how protoplanetary disks interact in young binary systems.

These findings were published in the November 19, 2009, edition of Science Express in an article entitled “Direct Imaging of Bridged Twin Protoplanetary Disks in a Young Multiple Star” by S. Mayama et al. and will be subsequently published in Science.