By SpaceRef Editor
April 3, 2013
Filed under Astrophysics, Department of Energy, ISS, US 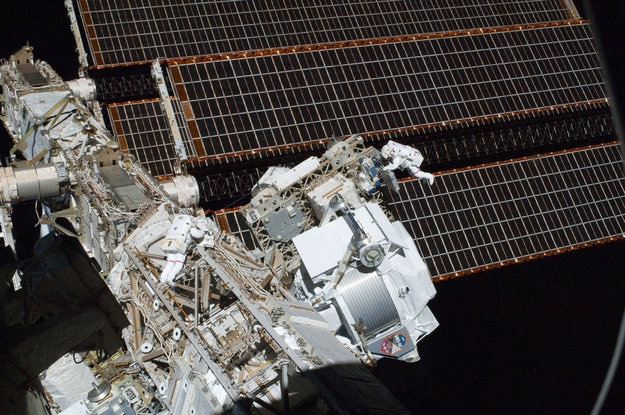 The first published results from the Alpha Magnetic Spectrometer (AMS), a major physics experiment operating on the International Space Station, were announced today by the AMS collaboration spokesman, Nobel Laureate Samuel Ting. The result is the most precise measurement to date of the ratio of positrons to electrons in cosmic rays. Measurements of this key ratio may eventually provide the world with our first glimpse into dark matter.

The AMS experiment, developed under the leadership of Professor Ting, with support from the U.S. Department of Energy and fifteen other international partners, is the world’s most precise detector of cosmic rays. It was constructed at universities around the world and assembled at the European Organization for Nuclear Research (CERN).

“We are very excited with this first result from AMS,” said James Siegrist, DOE Associate Director of Science for High Energy Physics. “We look forward to more important results in the future.”

“This result is the first step,” said Professor Ting, “the beginning of a series of high precision experimental results from the Alpha Magnetic Spectrometer. This shows that a large international particle physics collaboration can work together to do particle physics in space.”

The science goals of AMS include the search for dark matter, antimatter, and new physical phenomena. The detector provides high-precision measurements of cosmic ray particle fluxes, their ratios and gamma rays. From the time of its conception in 1994, U.S. support for the AMS experiment has come from DOE’s Office of Science, which provided about $50 million in funding over the life of the program.

This first physics result from AMS is based on 18 months of operation, during which time AMS measured 6,800,000 cosmic ray electrons in the energy range of a half-billion to a trillion electron volts, and over 400,000 positrons (positive electrons), the largest number of energetic antimatter particles directly measured from space. The importance of this measurement is that it could eventually provide a “smoking gun” that certain dark matter particles exist and that dark matter particles and antiparticles are annihilating each other in space.

Although the data do not show a “smoking gun” at this time, this first high-precision (~1% error) measurement of the spectrum has interesting features not seen before that future data may help clarify. With additional data in the coming years, AMS has the potential to shed light on dark matter.

AMS was installed on the Space Station on May 19, 2011 after having been brought into orbit on the last flight of NASA’s space shuttle Endeavour under the command of Captain Mark Kelly. Within only hours of its installation on the exterior of the Space Station, AMS became fully operational, and to date has measured over 30 billion cosmic ray events. Working in close cooperation with NASA astronauts and NASA’s Johnson Space Center and Marshall Space Flight Center, AMS has maintained a flawless record of performance in the face of a hostile space environment.

Hundreds of scientists, engineers, technicians and students from all over the world have worked together for over 18 years on the AMS collaboration. The collaboration includes scientists from Europe (Finland, France, Germany, Italy, the Netherlands, Portugal, Spain, Switzerland, Romania, Russia, Turkey), Asia (China, Korea, Taiwan), and North America (Mexico and the United States).

DOE’s Office of Science is the single largest supporter of basic research in the physical sciences in the United States, and is working to address some of the most pressing challenges of our time. For more information, please visit science.energy.gov.