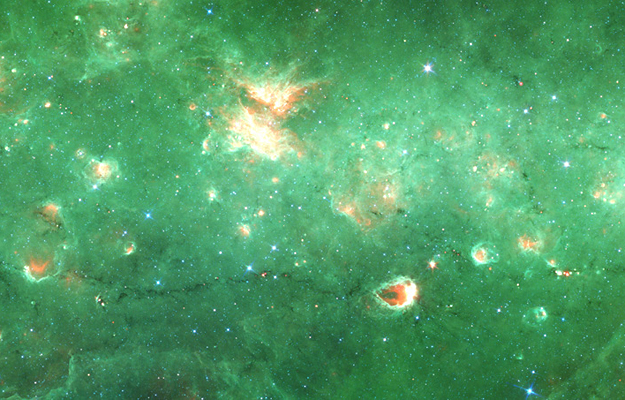 Our Milky Way is a spiral galaxy – a pinwheel-shaped collection of stars, gas and dust. It has a central bar and two major spiral arms that wrap around its disk. Since we view the Milky Way from the inside, its exact structure is difficult to determine.

Astronomers have identified a new structure in the Milky Way: a long tendril of dust and gas that they are calling a “bone.”

“This is the first time we’ve seen such a delicate piece of the galactic skeleton,” says lead author Alyssa Goodman of the Harvard-Smithsonian Center for Astrophysics (CfA). Goodman presented the discovery today in a press conference at a meeting of the American Astronomical Society in Long Beach, Calif.

Computer simulations of galaxy formation show webs of filaments within spiral disks. It is very likely that the newly discovered Milky Way feature is one of these “bone-like” filaments.

Goodman and her colleagues spotted the galactic bone while studying a dust cloud nicknamed “Nessie.” The central part of the “Nessie” bone was discovered in Spitzer Space Telescope data in 2010 by James Jackson (Boston University), who named it after the Loch Ness Monster. Goodman’s team noticed that Nessie appears at least twice, and possibly as much as eight times, longer than Jackson’s original claim.

Radio emissions from molecular gas show that the feature is not a chance projection of material on the sky, but instead a real feature. Not only is “Nessie” in the galactic plane, but also it extends much longer than anyone anticipated. This slender bone of the Milky Way is more than 300 light-years long but only 1 or 2 light-years wide. It contains about 100,000 suns’ worth of material, and now looks more like a cosmic snake.

“This bone is much more like a fibula – the long skinny bone in your leg – than it is like the tibia, or big thick leg bone,” explains Goodman.

“It’s possible that the ‘Nessie’ bone lies within a spiral arm, or that it is part of a web connecting bolder spiral features. Our hope is that we and other astronomers will find more of these features, and use them to map the skeleton of the Milky Way in 3-D,” she adds.