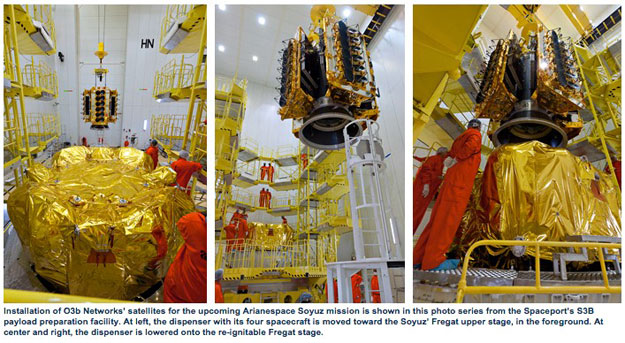 O3b Networks’ four-satellite payload for Arianespace’s next Soyuz flight has been integrated on the launcher’s Fregat upper stage, marking another milestone at the Spaceport in preparations for the December 18 afternoon mission from French Guiana.

The cluster of spacecraft – previously installed on a tube-shaped dispenser system – was mated atop the Fregat upper stage during activity in the Spaceport’s S3B payload preparation facility.

This step will be followed by encapsulation of the Fregat stage and its satellites in a protective payload fairing, creating an “upper composite” unit to be placed atop Soyuz once the medium-lift vehicle has been rolled out to the launch zone.

Arianespace’s upcoming Soyuz flight is the 10th from French Guiana since this launcher’s introduction at the Spaceport in October 2011, as well as its third at the service of O3b Networks.

The previous two missions for O3b Networks also lofted four spacecraft each on launches performed in July 2014 and June 2013 – enabling the company to deliver connectivity that combines the reach of satellite with the speed of fiber, providing customers with affordable, low latency, high bandwidth connectivity.

Thales Alenia Space built the satellites as prime contractor, with the spacecraft having individual liftoff masses of 700 kg. They are designed to operate in circular orbit, giving the O3b Networks’ satellite constellation a vast coverage area across emerging and insufficiently connected markets in Latin America, Africa, the Middle East, Asia and Australia – with a collective population of over 3 billion people.

For more information, see the VS10 launch kit.