By SpaceRef Editor
April 28, 2009
Filed under Harvard-Smithsonian Center for Astrophysics, Swift, US

Astronomers at the Harvard-Smithsonian Center for Astrophysics, along
with colleagues elsewhere in the United States and in the United
Kingdom, have discovered the most distant object in the universe — a
spectacular stellar explosion known as a gamma-ray burst located about
13 billion light years away.

The burst, dubbed GRB 090423, was detected by NASA’s Swift satellite
on 2009 April 23 and was observed by the US and UK team within minutes
of its discovery. The observations demonstrated that the
record-breaking explosion occurred when the universe was only 630
million years old, a mere one-twentieth of its current age.

“I have been chasing gamma-ray bursts for a decade, trying to find
such a spectacular event,” said Edo Berger, a professor at Harvard
University and a leading member of the team that first demonstrated
the burst’s origin. 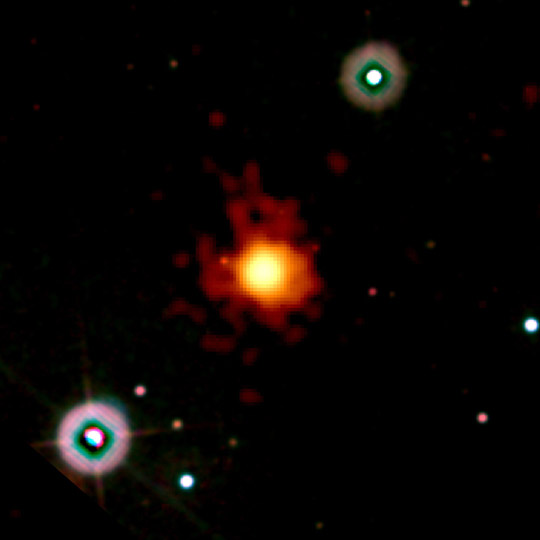 Data from Swift’s Ultraviolet/Optical (blue, green) and X-Ray (orange and red) telescopes are merged in this image. No visible light accompanied the burst, which alone suggests great distance. This image is 6.3 arcminutes across. Credit: NASA/Swift/Stefan Immler

“We now have the first direct proof that the young universe was teeming with exploding stars and newly-born black holes only a few fundred million years after the Big Bang,” he added.

At 3:55 a.m. EDT on April 23, the Swift satellite detected a ten-second-long gamma-ray burst of modest brightness. It quickly pivoted to bring its Ultraviolet/Optical and X-Ray telescopes to bear on the burst location. Swift saw a fading X-ray afterglow but none in visible light.

“That alone suggested this could be a very distant object,” explained Berger. Beyond a certain distance, the expansion of the universe shifts all optical emission into longer infrared wavelengths. While a star’s ultraviolet light could be similarly shifted into the visible region, UV-absorbing hydrogen gas grows thicker at earlier times. “If you look far enough away, you can’t see visible light from any object,” he noted.

“The burst most likely arose from the explosion of a massive star,” said Derek Fox at Penn State University. “We’re seeing the demise of a star – and probably the birth of a black hole – in one of the universe’s earliest stellar generations.”

Within three hours of the burst, Nial Tanvir at the University of Leicester, U.K., and his colleagues detected an infrared source at the Swift position using the United Kingdom Infrared Telescope on Mauna Kea, Hawaii. “Burst afterglows provide us with the most information about the exploded star and its environs,” Tanvir said. “But because afterglows fade out so fast, we must target them quickly.”

At the same time, Berger and Fox led an effort to obtain infrared images of the afterglow using the Gemini North Telescope on Mauna Kea. The source appeared in longer-wavelength images, but was absent in an image taken at the shortest wavelength (1 micron). This “drop out” corresponded to a distance of about 13 billion light-years.

At the Galileo National Telescope on La Palma in the Canary Islands, a team including Guido Chincarini at the University of Milan-Bicocca, Italy, determined that the afterglow’s so-called redshift was at least 7.6. Tanvir’s team, gathering nearly simultaneous observations using one of the European Southern Observatory’s Very Large Telescopes on Cerro Paranal, Chile, found a redshift of 8.2, later confirmed by the Italian group. This means the burst exploded 13.035 billion light-years away.

The previous record holder was a burst seen in September 2008. It showed a redshift of 6.7, which places it 190 million light-years closer than GRB 090423.

“This new gamma-ray burst smashed all the records,” noted Berger. “It easily surpassed the most distant galaxies and quasars. In fact, it showed that we can use these spectacular events to pinpoint the first generation of stars and galaxies.”

Gamma-ray bursts are the universe’s most luminous explosions. Most occur when massive stars run out of nuclear fuel. As their cores collapse into a black hole or neutron star, gas jets – driven by processes not fully understood – punch through the star and blast into space. There, they strike gas previously shed by the star and heat it, which generates short-lived afterglows in other wavelengths.