By SpaceRef Editor
December 18, 2012
Filed under Astrophysics, University of Chicago, US 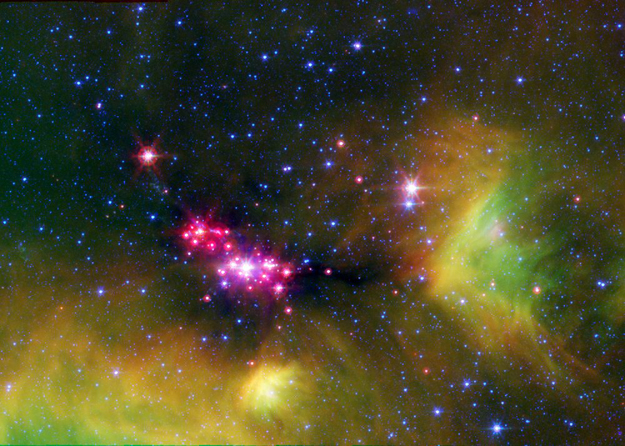 A new study published by University of Chicago researchers challenges the notion that the force of an exploding star forced the formation of the solar system.

In this study, published online last month in Earth and Planetary Science Letters, authors Haolan Tang and Nicolas Dauphas found the radioactive isotope iron 60 — the telltale sign of an exploding star — low in abundance and well mixed in solar system material. As cosmochemists, they look for remnants of stellar explosions in meteorites to help determine the conditions under which the solar system formed.

Some remnants are radioactive isotopes: unstable, energetic atoms that decay over time. Scientists in the past decade have found high amounts of the radioactive isotope iron 60 in early solar system materials. “If you have iron 60 in high abundance in the solar system, that’s a ‘smoking gun’ — evidence for the presence of a supernova,” said Dauphas, professor in geophysical sciences.

Iron 60 can only originate from a supernova, so scientists have tried to explain this apparent abundance by suggesting that a supernova occurred nearby, spreading the isotope through the explosion.

But Tang and Dauphas’ results were different from previous work: They discovered that levels of iron 60 were uniform and low in early solar system material. They arrived at these conclusions by testing meteorite samples. To measure iron 60’s abundance, they looked at the same materials that previous researchers had worked on, but used a different, more precise approach that yielded evidence of very low iron 60.

This process ultimately produced results with much smaller errors. “Haolan has dedicated five years of very hard work to reach these conclusions, so we did not make those claims lightly. We’ve been extremely careful to reach a point where we’re ready to go public on those measurements,” Dauphas said.

“The two isotopes act like inseparable twins: Once we knew where iron 58 was, we knew iron 60 couldn’t be very far away,” Dauphas explained.

They found little variation of iron 58 in their measurements of various meteorite samples, which confirmed their conclusion that iron 60 was uniformly distributed. To account for their unprecedented findings, Tang and Dauphas suggest that the low levels of iron 60 probably came from the long-term accumulation of iron 60 in the interstellar medium from the ashes of countless stars past, instead of a nearby cataclysmic event like a supernova.

If this is true, Dauphas said, there is then “no need to invoke any nearby star to make iron 60.” However, it is more difficult to account for the high abundance of aluminum 26, which implies the presence of a nearby star.

Instead of explaining this abundance by supernova, Tang and Dauphas propose that a massive star (perhaps more than 20 times the mass of the Sun) sheds its gaseous outer layers through winds, spreading aluminum 26 and contaminating the material that would eventually form the solar system, while iron 60 remained locked inside the massive star’s interior. If the solar system formed from this material, this alternate scenario would account for the abundances of both isotopes.

“In the future, this study must be considered when people build their story about solar system origin and formation,” Tang said.